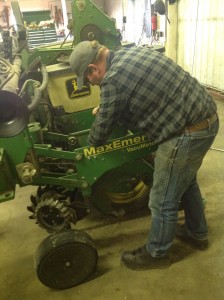 Picture this: Dave Fuller is outside on a beautiful spring day, preparing his planter for the upcoming season when he sees a fire truck barreling down the road to save a house in his neighborhood. As the truck passes Dave’s home, the driver lays on the horn. That is the cue! Dave runs to his truck and rushes to the scene where he pitches in.

“If there was a fire in our area and they needed more help, they would just lay on the horn,” explains Dave. “When we heard that, other farmers and I would rush off to help in any way we could.”

After Dave showed up quite a few times to help, members of the fire department asked him to become an official member. Dave gladly accepted and has been serving on the Henry (South Dakota) Fire Department for the past 14 years.

“I think it’s important to be on the fire department because you can provide comfort and support when people need it most,” he says. “It’s nice to give back and people really appreciate all we do.” 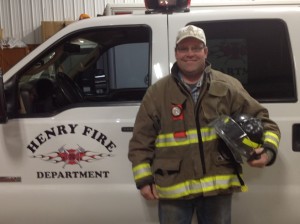 Dave shared an inspiring story about one of his experiences on the fire department. They were called out on a medical emergency at the home of an individual who was having fainting spells. A gentleman was taken by ambulance to the nearest hospital, but his wife was not able to go with him. Because they were new to the area and didn’t have any family near, Dave drove her to the hospital. He didn’t think much of it. Later that year, Dave saw the woman in the grocery store. She recognized Dave and thanked him again for his help.

The Henry Fire Department has 20 volunteers who help where needed. In addition to fighting fires, they have helped with storm clean up, EMT calls and traffic accidents.

“I think it was just bred into me to serve my community,” says Dave. “We all believe that we should help our neighbor in any way possible. When someone is in a time of need, they often turn to the fire department. 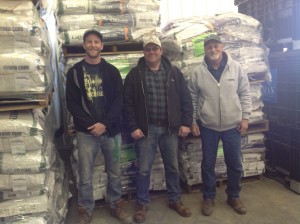 The Henry Fire Department also hosts a variety of community events throughout the year, including bean bag tournaments, street dances, a mud run, raffles and a pork feed. They use these funds to update their equipment and buy resources for their crew. They also conduct safety demonstrations at local schools.

Dave farms with his parents, Lee and Dorothy, outside of Henry. They raise corn, soybeans, small grains, and beef cattle. Dave and his wife, Kim, have four children: Carter, Peyton, Collin and Olivia.

We greatly appreciate Dave’s service to his community and his willingness to help anyone in a time of need. If you’d like to nominate someone on your local fire department or EMS crew for a feature story on TheFieldPosiiton.com, call the Latham office at 1-877-GO-LATHAM!