From the Field Crop Report: April 25

Field work and seed deliveries are heating up just like the temperatures in Eastern Iowa.

Corn planting is underway in Central Iowa. Make sure your planter is set correctly. To maximize yield and to prevent root and stock issues, we recommend planting  corn 2.5 inches deep. Soil temps are also very important. Soil temps need to be a minimum of 50 degrees for corn and 60 degrees is recommended for soybeans. 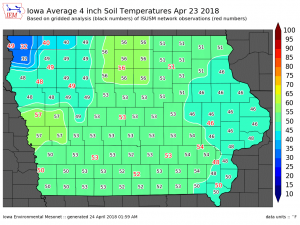 How the weather has changed in one week! The 10+ inches of snow we received last week has melted. This work week started with 60-degree temperatures and sunny skies. It looks like more sunshine and warm temperatures are on the way, so seed deliveries are in full force.

As eager as everyone is to get in the field, wait for fit planting conditions. Soil temperature and moisture, plus seed depth and spacing, are key to maximizing yield. Here are a few things to keep in mind before you enter the field: 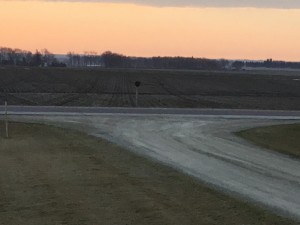 That’s lot of Latham® soybeans! The arrival of warm, spring temperatures means this seed will soon leave the shed. 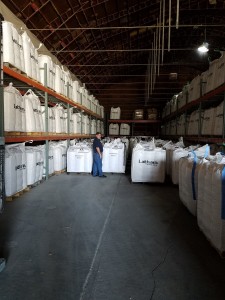 The 4-inch soil temperature was 41° at 7 AM on April 24 at my farm. Temperatures have warmed during the past week, aren’t yet the desired 50° for planting corn. 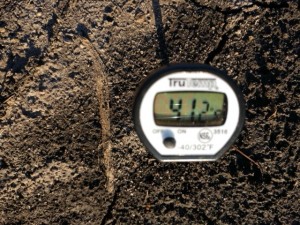 It feels like spring has finally arrived in Northwest Iowa! Although we are eager to get in the field, we must be patient for optimal planting conditions.  We want to maximize yield, especially given today’s commodity prices.

Keep in mind that seed corn absorbs soil moisture at less than 50 degrees Fahrenheit, but soil temps must reach 50 degrees or higher for germination. Check out the 5- to 7-day forecast. If soil temperatures are climbing, consider planting corn. If the forecast looks like cold and wet weather for a while, hold off for better conditions. You don’t want seeds to imbibe cold water that can lead to chilling effect or ambient air temperatures to freeze seedlings as they emerge. 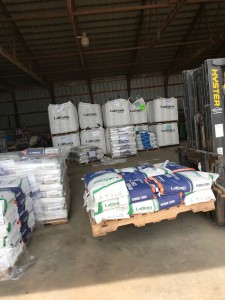 Latham® 455TQAlfalfa was being seeded at the Krapfl Farm yesterday!

Spring has arrived and there is no turning back! Nice weather has allowed southern Wisconsin farmers to seed alfalfa.  The fields worked up nicely on Tuesday for one of our customers in Potosi, who is seeding LH 9120 BR. I expect the corn planters to hit the fields Thursday or Friday. 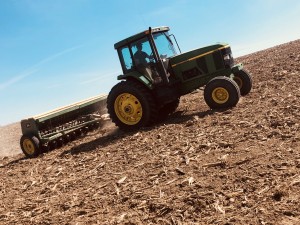 What a difference a week makes! Last week we had 8 to 10 inches of snow on the ground, and now we’re looking at clear fields. This is a picture from same location as the one I posted last week.

Farmers are getting excited. Although the weather warmer is inviting, soil temperatures are still in the low 40s. A few farmers are starting tillage, but it’s not yet fit to as there’s still a lot of frost in the ground. 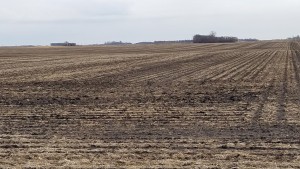 This picture was taken April 24 near Glyndon, Minn. Equipment is parked as farmers wait for soils to dry, so planting can begin! 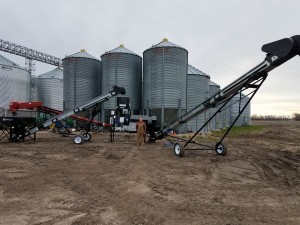 A week ago most of South Dakota was sitting under a foot or more of snow. During the past week, temperatures really warmed up and we enjoyed some nice days. Today it’s again cold. Rain is falling across most of the state, but at least it’s not snow! Soil temperatures are plenty cool and ground conditions are fairly wet, so no field work is underway. 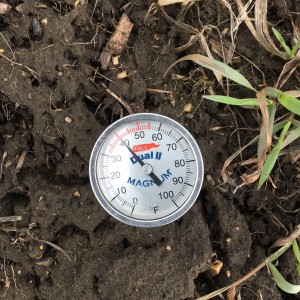 Mother Nature has finally turned a corner! Temps in the 50s have prevailed for the past week after snow blanketed fields the previous week. Frost is still present at 3.5 feet, so we still have a ways to go before field conditions are ready to plant. ” Soil temperatures are only 37 degrees in Northeast South Dakota.  Warmer weather is forecast, so won’t have to wait much longer. Planting will likely start in Central SD and move east as soils dry. 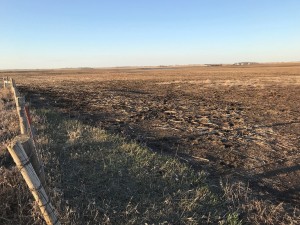 There’s still a little snow on the ground, but the tile pumps are starting to run. For me, this is the first real sign of spring. Soil temperatures are warming, so soon we will start planting. 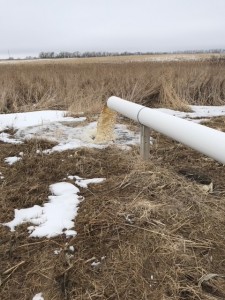 We have entered a very favorable weather pattern recently. If the long term forecast holds true, we should be able to seed/plant all crops within a steady procession of one another: spring wheat, barley, durum, and all cereal grains followed by field peas and canola followed by corn, edibles, soybeans and sunflowers.

One thing that always amazes me with the ever-changing trends of agriculture is the size of the seeding/planting equipment. Plant 500 acres in a day with one machine? No problem, according to John Deere’s latest and greatest!

A customer of mine is doing a demo with this to seed barley. His 620 horsepower tractor is pulling a 855 bushel cart. He doesn’t have to fill anything very often, making it very efficient. 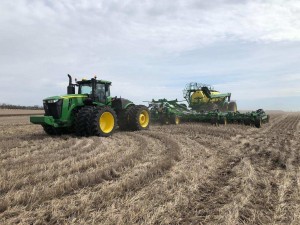