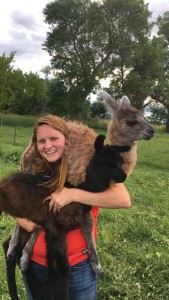 Laura Meany grew up on a farm in Rose Creek, Minnesota. Her family has a row crop operation and raise livestock including dairy goats, llamas and sheep. Like most agriculturalists, Laura got her start in agriculture by being involved in 4-H and FFA.

“When I began in 4-H I really wanted to show horses, but instead I brought home a llama. I bought this llama using my own money and purchased it from a family friend without telling my parents. Now we have 22 llamas and it has been a big part of my agricultural journey.”

Her passion for agriculture drew her to Iowa State University to study Public Service and Administration in Agriculture. Laura loved Iowa State and the people she had the opportunity to meet and interact with. However, Laura received terrible news that cut her education timeline short. Her Dad had suddenly passed away from a heart attack and their family needed someone to take over the family farm. Laura revised her degree plan to allow her to graduate a semester early and return home to the family farm. 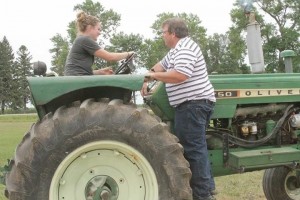 “I had always been around the farm when I was growing up but I wasn’t involved with the decision making and most of the time I was in the buddy seat instead of the driver’s seat. Therefore, being put into this situation was very nerve-racking.”

Taking over the farm was a dream of Laura’s, but she wasn’t expecting the opportunity to come this quickly. Many people in community told her that they would be willing to take care of the farm until she wanted to return, but Laura knew this is what she wanted to do! She faced this challenge head on and began to immerse herself in learning about what she needed to do. 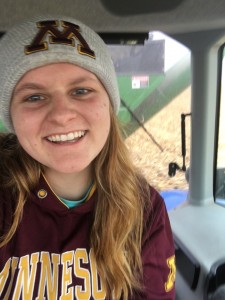 “My whole life I have been a very independent person, I like to figure things out on my own. When it came time for me to take over the farm I had to change this mentality and be willing to learn from others.”

Laura heavily relied on friends and family to teach her about the details of farming. She stated that her mom has been her biggest mentor during this process. She was able to help her father get through things when he began farming and now she is doing the same for Laura. This spring Laura planted her first crop on her own and is now finishing up harvesting this crop.

“I have learned more in the last three months completing my first growing season on my own then I did during my time in college. In farming, the only way to learn is by doing.”

While Laura plans to continue many of the traditions on the farm she plans to make some changes to improve the operation. She embraces the opportunity to farm so young and has set new goals for their farm. That also comes with added responsibility. 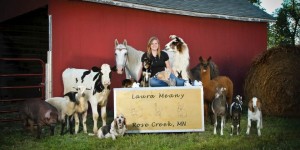 “The toughest part so far has been being the sole-decision maker. It can be intimidating making decisions that you have to stand by for the entire year!”

In the short time she has been farming Laura has learned a lot of life lessons she would pass on to other women in agriculture.

“I have also learned to accept the things you can’t control. At first, I was so anxious or nervous about the weather, getting my crops in on time and worrying about growing conditions. You must let that go because there is nothing you can do about it. This can easily be applied to farming but also in all aspects of your life”