Roots in Boots: Building A Future with Pork! 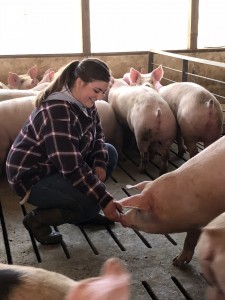 Family ties, rewarding experiences and the people. These are the three reasons Allison Bastian chose to pursue a career in agriculture.

Ever since Allison Bastian was a little girl, raising her own pigs was her ultimate dream. Allison grew up on a farm just west of New Ulm, Minnesota, where her family raises finisher pigs and has a corn and soybean row crop operation.

The Bastian Family was named the 2015 Nicollet County Farm Family of the Year.

One unique aspect is the Bastian family remains an independent hog producer. They market their own hogs instead of contracting with a pork production company.

Allison began helping on the farm at a young age and loved being outside with the animals.

“From day one I was really involved on the farm. I used to beg Dad to let me go outside and see the new pigs being unloaded at our farm,” she said. “I wanted to be involved. Even if it just holding a gate while they loaded out the pigs, I was happy to do it.”

As Allison grew older, her responsibilities grew. She started her own sow herd to raise her own pigs for market. This began through her showing career in 4-H. 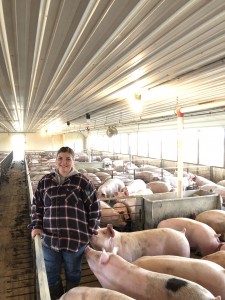 “I loved showing pigs because it showed me how rewarding the livestock industry can be,” said Allison, who began showing pigs in fourth grade through 4-H. “Hard work really does pay off and it kept me motivated.”

Allison showed a couple breeding gilts every year. When the show season concluded, she bred them and marketed the pigs. Raising these pigs was one of her favorite memories growing up on the farm.

“I remember when one of my first breeding gilts named Pearl was going to have her pigs. Before we left for church one Sunday, I snuck out to the barn and found Pearl having her babies. That was a really cool moment!  I got to see my work truly come full circle.” 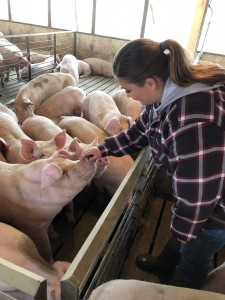 When it came time to make her college decision, there was no doubt in Allison’s mind that she was going to study agriculture. A senior at Iowa State University in Agricultural Business, Allison serves as president of the ISU National Agri-Marketing Association (NAMA) and as secretary of the Agricultural Business Club.

Allison has also had ag experience abroad. She took a trip to Japan and China in Summer 2016 to study pork production. She will be studying abroad again this fall in Ecuador.

After graduating in December, Allison will pursue a career in Ag Finance. She did three internships in this sector with AgStar Financial, Farm Credit Services of America, and AgriBank FCB. She plans to accept a job in her hometown area, so she can remain involved on the family farm.

“Our family roots run really deep on our farm and I wouldn’t want to live anywhere else,” says Allison, who is building her own contract finisher building just down the road from her home farm. “I want to raise my family just as I was raised, on a pig farm.” 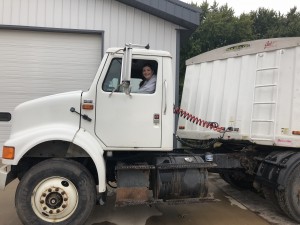 Through this process, Allison has learned valuable lessons she wants to pass on to other women in agriculture.

“Don’t get discouraged,” she advises. “Sometimes people in the industry won’t take you seriously because of your gender, but you can’t let that get to you. Keep persevering because it is what you love to do and that is what is important!”

Allison also believes it’s important to find mentors in agriculture. She met her mentor through the Agricultural Business Club.

“Find someone that is living your goals and reach out to them. If they did it then they can help you reach your goals!”