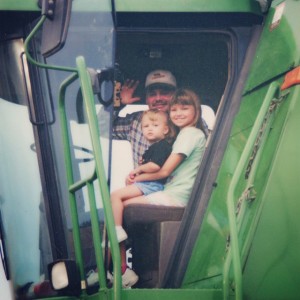 Courtney Davis grew up on a farm just outside of State Center, Iowa. She and her family farm 600 acres of corn and soybeans and have a family trucking business. Since she was able, Courtney has been very involved on the Davis Family Farm.

“Ever since I was a kid, I was willing to help my dad on the farm. On days we didn’t have school, I would look forward to spending all day outside.”

Courtney now spends her weekends operating the combine during harvest. Her dad, brother-in-law, and some hired friends alternate trucking the grain to town and running the grain carts. Whether she is riding in the buddy seat or in the driver’s seat, she is happy during harvest.

“Harvest is easily the best time of the year on the farm! My whole family looks forward to it and we enjoy being in the field together.” 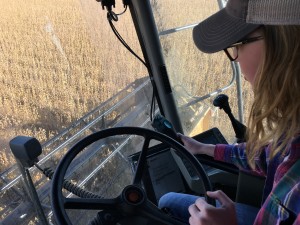 Not only does Courtney like to operate combines and tractors, she also has a passion for restoring them. This hobby began through her FFA chapter. Each year their chapter would restore a tractor as a part of its Ag Mechanics course. When the school year ended the tractor was not complete and most of the students involved graduated. Although she hadn’t taken the class, Courtney’s adviser asked her to step in and enlist the help of some of her friends to finish the project in time for the Iowa State Fair.

“When I started my first tractor, I had really no idea how to begin. I had a great FFA adviser and other mentors that guided me along the way and taught me a lot.”

After completing her first tractor, she restored two more with a team of FFA students before graduating from high school. Courtney then went off to Iowa State to major in Agricultural Studies and minor in Agronomy. She returned home that summer for an internship with Key Cooperative in a neighboring town. 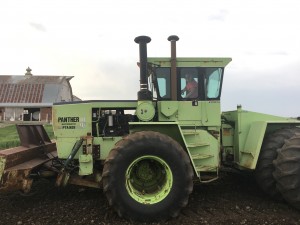 “I was talking with my dad about my plan for the summer and he was hoping I’d restore one of our family tractors instead of an FFA tractor. We had two options of tractors to restore, so I chose to individually restore our 1981 Steiger Panther because it needed the most work.”

Before getting started on the cosmetics of the tractor, there were a few mechanical repairs needed. With some guidance, Courtney replaced the gaskets within the exhaust manifold and the cylinder head and later replaced the wheel seal bearings to ensure the tractor would run smoothly. Then the painting process began. Courtney spent her entire Memorial Day weekend sandblasting the tractor.

“Painting was the most time-consuming process. I had gained my experience shooting paint on my past three tractors, but the scale of this tractor made painting much more difficult. It took a lot of trial and error mixed with attention to detail to ensure a quality paint job. I was unable to avoid getting a few runs and a bug or two stuck in my paint; I like to think that these imperfections just added character and proved I had done the work myself.” 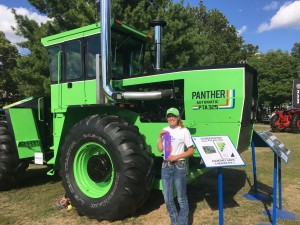 After putting in over 300 hours of hard work over the summer, it was finally time to show off the tractor at the Iowa State Fair. She received a purple ribbon and it was one of the most popular tractors at the fair.

“Seeing the final product made every long, hot hour worth it. It turned out better that I could have ever imagined and it was inspiring to see how fascinated everyone at the fair was with my work. I had a wrench or a hand on every part of that project and that is what makes it so special. I might not have placed in the top three, but I learned a lot, had loads of fun, and made memories that I will forever treasure!”

After finishing the tractor, she returned to ISU for her sophomore year of college. Courtney is very involved as a student leader on campus. She serves as the 3rd Vice President of the ISU National Agri-Marketing Association (NAMA) and is a member of the NAMA Competition Team and the Agricultural Entrepreneurship Initiative’s Student Advisory Team. Last year she was named the ISU NAMA Outstanding New Member of the Year.

Through the process of restoring her tractor, Courtney learned valuable lessons she wants to pass on to other women in agriculture.

“As a woman in agriculture, sometimes you will have to do more to prove yourself. It is easy to get discouraged by that, but instead, I use it to motivate myself. You must believe in yourself! If you have a passion for something, go after it!”