From the Field Crop Report: Oct 4

Soybean yields are all over the board, depending on when and where the rain fell during the growing season. This field of Latham® L 2186 Liberty went 60 bushels per acre and averaged 12.5% moisture in Grundy County.

Moisture was getting really low, running at 10% or lower. Rain across northern Iowa and southern Minnesota this week should even these soybean fields out. Hopefully, we’ll catch a break in the weather so everyone can get rolling again.

Soybean harvest is going at a whirlwind pace in Eastern Iowa. Soybean yields have been exceeding expectations given the growing season this year. Be sure to check out our plot results. We’ll also update F.I.R.S.T. Trials results on our website www.lathamseeds.com.

Final tally on a field of Latham 1787 LL beans at Zach Greiman’s farm in Garner was surprising! Cattle were killed in the July 10th hail storm. Crops were devastated, but this field went 67 bushels per acre. 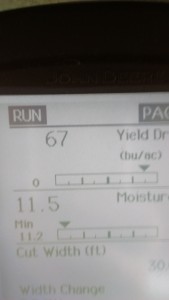 We harvested a Latham® SuperStrip soybean plot on Friday, Sept, 29, at the Ricklefs’ farm near Rolfe, Iowa.

Corn yields are way better than farmers were forecasting before harvest, and I’m hearing yield reports of 175 to 210 bushels per acres. I’m seeing some ear rot, but nothing too concerning at this point.

Soybean yields are also better than expected. On sandy soils with limited rain fall, however, plants are shorter and not yielding as well. 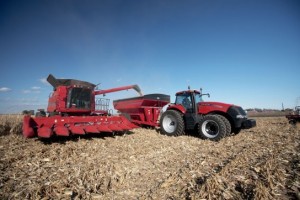 Only a few soybeans have been taken out in Northwest Iowa, but the yield are better than expected. Latham L 1787 Liberty did 70 bushels/acre in Hartley, and L 1328 L went 60 bu/A near Estherville. 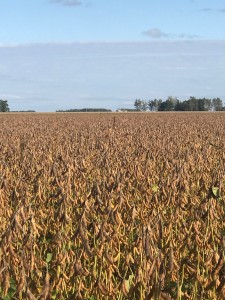 I left home early on the morning of October 4 and traveled to Norfolk, Nebraska. The amount of crops is the field is amazing!

Honestly, I didn’t see a field where the crop had been taken out. I talked with one farmer who hasn’t yet turned a wheel, and he has 7,000 acres to harvest. One dealer received 1.7 inches of rain over the weekend, so his combine is parked. He doesn’t think any fields within 20 miles of his farm have been combined. Another dealer received 2.3 inches of rain over the weekend, and he has yet to start combining. He said this weekend’s forecast calls for another 2 inches of rain.

We’re hoping for a drier week ahead!

Sunrise on this field of Latham 2228 R2 soybeans was quite the sight!  As soybeans are harvested across Wisconsin, farmers are relatively surprised. Yields have been better than expected afte a cool, wet growing season.  On average, yields are in the low 60’s at 10.5% moisture. 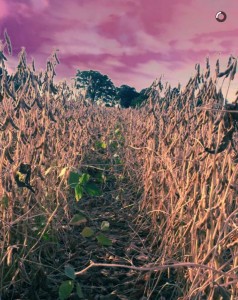 Harvest has been slowed across North Dakota with consistent but sporadic rainfalls. Early harvest reports are good. Farmers are reporting average to above-average yields, despite experiencing one of the most challenging years in recent history. 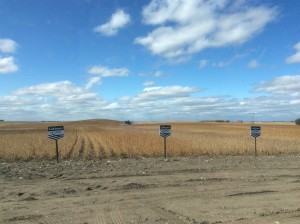 In this picture the grower Bryan Kenner of BK Seeds, Maddock ND is squaring up the test plot right before we took it off. It will continue to be an interesting fall. We have a lot of new products and technologies available in testing. It is definitely one of those revolutionary times in agriculture.

We got a bird’s eye view of this field of LH 5062 GT/LFY silage corn east of Anselm, North Dakota. It’s running more than 32 tons per acre, and the customer is harvesting at a rate of 270 tons per hour. 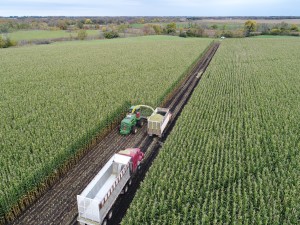 Harvest has been delayed due to heavy rainfall. From 7 to 10 inches has fallen in the last week! Dry areas in Central South Dakota received some rain, as well. Yield reports of 30 to 50 bushels have been coming in from that area.

Silage appraisals of LH 5062 LFY near Kranzburg have been running 190 to 220 bushels!

This has been a busy week in eastern South Dakota!  Soybean harvest was gearing up last week but got shut down by rain over the weekend. Eastern SD has received anywhere from 4 to 13 inches in the last two weeks. Yield reports are coming in slowly, but the August rain did our soybeans some good. I want to highlight some 1858 R2s on sod in East Central South Dakota. No wonder this Latham® soybean brand scored the highest yield of any brand for two years running in the F.I.R.S.T. Trials!

Although Latham Hi-Tech Seeds doesn’t sell sugar beets, I’d be remiss not to talk about it because so there is so much sugar beet production in my territory. This picture was taken at the Hampton receiving station on Oct. 3.

Sugar beet harvest is in full swing up and down the Red River Valley. Growers transports their sugar beets by truck to a receiving station where it is then transferred to one of the five factories for processing. Harvest starts in early September and continues until all sugar beets have been depleted, which occurs in May the following year. 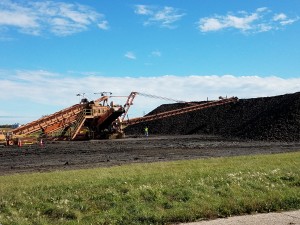 Harvest has come to a halt for everyone in southern Minnesota any where between 2 and 5 inches of rain fell during the past few days. The small amount of soybean yields that have been reported are running in the upper 50s to lower 60s, which is better than expected. Sure hope it dries up soon, so we can get back in the fields! 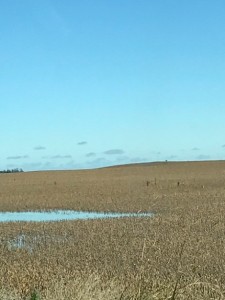