Passion for Horses Leads to Love for Pork 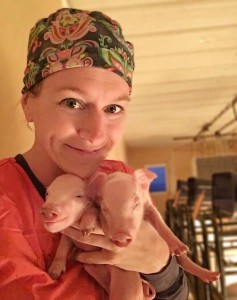 Erin Brenneman’s motto is evident from her social media posts, which give followers an insider’s look at what it’s like to be part of her family’s southeast Iowa farming operation. You can see the passion she has for piglets, as well as for the Chicago Cubs. Photos show her values: faith, family and farming.

One reason Erin is so passionate about her job as a farrowing specialist and public relations practitioner for Brenneman Pork is because it’s 180 degrees different from how she was raised in Chicago.

“I still can’t get over the fact that the school bus picks up my kids from our house. In the city, you have to walk blocks to get to the bus stop. I’m like, “OMG! The bus picks you up at your house?’ While my kids are waiting for the bus, they’re picking up corn or playing with the dogs. I find it fascinating.”

Honestly, I find it fascinating how Erin went from catching the city bus to driving the catch cart during fall harvest. (She graciously let me interview while she was in the tractor cab.) It was her love of animals that drew Erin to Iowa State University where she majored in Animal Science with the dream of becoming a veterinarian. 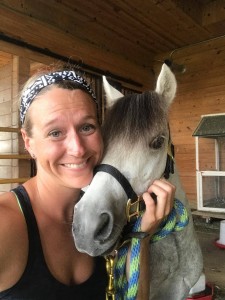 “I grew up visiting the Brookfield Zoo and watching the dolphin show. I thought it would be so cool to be a marine biologist and work with dolphins,” explains Erin, who also studied violin for 12 years and played in the high school symphony orchestra. If you see her wearing ear buds as she works, there’s a good chance she’s listening to classical music.

“When I was eight years old, I started taking riding lessons through a program in the city,” adds Erin. “The older I got, the more time I spent with horses. After school, I’d ride horses until the barn closed. I’d ride other people’s horses, too, so they would get exercised.”

There’s nothing like love to motivate a person, says Erin. She fell in love with a Quarter Horse named Spook, so she worked at the stables to buy Spook and to board him. She decided to study Animal Science / pre-vet and toured the Iowa State University campus.

“When I toured the ISU campus, I fell in love with its beauty. It was everything I wanted in a school,” says Erin, who moved Spook to Ames with her. Chemisty 177 changed Erin’s mind about veterinary school, but she remained committed to earning a degree in 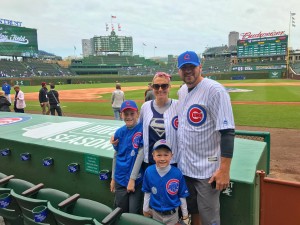 It was at ISU that that Erin fell in love once again, this time with the man she would marry.

“Tim lived a floor below me and we were brother/sister floors. We began to hang out and well, you know the rest of the story! I honestly was most impressed with Tim’s work ethic. He would go home to work every weekend and that piqued my curiosity.”

The couple was married in 2004 and make their home just ¼ mile west from the Brenneman Pork office.

“My in-laws, Rob and Char, have given me the opportunity to be involved in the family business,” says Erin. “And 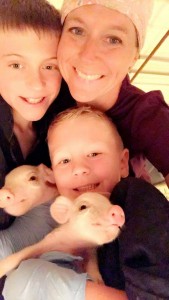 I’m so grateful for that. Once I expressed an interest in learning and in being part of the operation, they opened their arms. They really want to see Tim and me succeed.”

When Erin started working at Brenneman Pork, she says she was fascinated by everything that went on but felt spread thin. She wanted to be good enough at something to get noticed, so her father-in-law advised her to choose a specialty and she chose to focus on farrowing.

Erin still spends a great deal of her time in the farrowing unit, but at least half of her day is spent on public relations. She goes into the barns and looks at what’s happening through a PR lens. Erin shares photos and videos through the Brenneman Pork Facebook page, as well as @sowmomma on Twitter and “Spookgal” on Snapchat.

“I was amazed to see how many people started following me online,” says Erin, who decided to start a farm Facebook page one day out of the blue. “Joanne Albaugh asked to feature me in an article in Pork Network. Then I was asked to blog for the Pork Network. I love talking about farming, so I’m always glad to help promote this industry when I’m asked. The U.S. Farmers 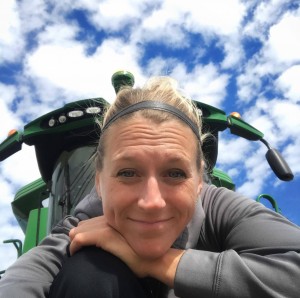 and Ranchers Alliance got me into speaking. When asked for advice, I always say that we should try to connect rather than educate.”

Erin also has a few words of advice for those interested in pursuing ag careers.

“The door is wide open in the field of agriculture. Be careful you don’t burn bridges because I guarantee that you will run into that person again. Every time I meet new people I’m amazed at how many friends we have in common. Anytime I go to a conference, it’s like one big family reunion. I just love how warm and welcoming people in agriculture are.”