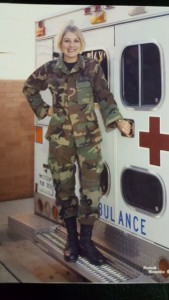 Where were you when the world stopped turning that September day? Most Americans can tell you exactly where they were standing or what they were doing when they first heard reports that an airplane had crashed into the North Tower of the World Trade Center. Less than an hour later, a second hijacked airliner crashed into the South Tower.

While many of us were questioning the safety of our homeland, thousands of men and women on active military duty sprang into action. Mindy Miller was stationed at Sheppard Air Force Base in Wichita Falls, Texas.

“I was in the dorms when the planes struck. A girl who lived across the hall learned that her mom was a stewardess on one of the planes that hit the World Trade Center,” recalls the 35-year-old mother of three. “We were on lockdown. We had to leave all the windows closed in our dorms. We couldn’t use our cell phones.”

When America is at risk, our military is called into action.

“None of us where sure where we would be called to, and many of our duties changed,” explains Miller. “One of my roommates was planning to move to Germany and had shipped her belongings there. Because of the skill set she had, however, she was sent to a different country. It took another two to three months before her belongings arrived at her new base. You just went were you were called.”

As a medic who was trained to save lives with very few resources available, Miller stayed in Texas. Later she was transferred to a military hospital in Tucson, Arizona, where she held more of a managerial position. Her new duties required her to clear people for deployment. It was her job to make sure soldiers were physically and mentally fit to serve.

“I feel like I played such a small role compared to my friends and colleagues who were deployed time and again,” says Miller. “But, I feel privileged that I was able to serve.”

“Basic training isn’t easy,” adds Miller. “It’s not easy being that young and being so far away from home. Your squadron becomes your family, and you learn to watch out for one another. The military instills values. You develop a new love for country. You come to love your fellow airmen. I have so much respect for the men and women in uniform.”

There’s so much pride and honor that goes into wearing a uniform, whether you’re a firefighter, a police officer or a member of the U.S. military. You’re representing your country, your unit and yourself. Uniforms must be crisp. Caps must be straight. Shoes must be polished.

After five and one-half years of military service, Miller received an honorable discharge from the Air Force. She returned to the Des Moines area to pursue her dream of becoming a registered nurse.

“I enlisted the Air Force right out of high school because I had a dream of being a nurse,” explains Miller, whose grandfather had served in the Army. One of her cousins served in the Navy and another in the Marines. “My parents were very hard working, but I knew that my family didn’t have money to put me through college. I had to find a way to make my dream come true.”

As a disabled veteran returning the classroom, Miller was able to get educational assistance through Iowa Vocational Rehabilitation Services. She enrolled in the nursing program at Des Moines Area Community College (DMACC) in 2006 and became a registered nurse. Shortly thereafter, she met Ryan Miller. 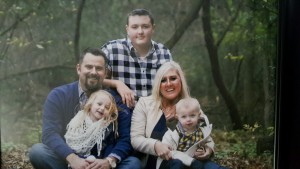 Ryan and Mindy Miller with their 4½ year-old twins, Timber and Brox; and their 14-year old son, Kaiden.

The couple soon married and lived in the Ankeny area for six years. They both had 8 to 5 jobs that they greatly enjoyed. Then Ryan got asked a question that changed the course of their path and prompted them to uproot their family and head north.

Ryan’s father asked if he wanted to transition into the family farming operation. To help provide additional income until the farm transition is complete, Ryan and Mindy built an egg laying facility and raise breeding stock for a local hatchery. Until this year, Mindy also had been working as a parent educator for Prairie Lakes Area Education Agency. Now she’s transitioning into a more active role on the farm.

“It was a really tough decision to leave Ankeny because there are so many activities, services and conveniences in the metro area. On the other hand, it’s easy to get caught up in the hustle and bustle,” admits Mindy. “It’s been such a blessing to move to a smaller area. Although we’re on call 24 hours a day at the farm, we’re together as a family. Our kids are gaining new experiences. We’ve able to instill values, beliefs and work ethic simply by working with our kids by our side. I feel like our time together as a family is more quality time now.”