You can’t scroll through Facebook or Twitter or tune into the radio this summer without hearing talk about herbicide-damaged crops. The buzz has been so centered on dicamba that many people are quick to make assumptions.

In this photo, dicamba was blamed for the damage when it actually resulted from an HPPD-inhibiting herbicide like Balance or Callisto.

How can you tell the difference? Check out this injury summary from Penn State, and learn the four signs of dicamba drift from the Prairie Farmer.

Milder temperatures prevailed this last week of July, which coincided with much of tasseling. Many farmers are still waiting on rain. Pastures and crops have been damaged due to lack of rain. Soybeans are beginning to fill pods as some are now waist high. August rains can make a soybean crop, so we’re hoping precipitation is on the way!

The last two weeks have brought some much needed rain to South Dakota. Rain fall amounts ranged from one to 11 inches. These two photos were taken only a few miles away and 6 days apart. Wheat harvest is well under way, and yield reports are variable. Some wheat is coming out with good yields, test weight, and protein; other fields got hit by the drought. I have a feeling we’re going to see variable yields across the board this crop year, depending on where and when fields got rain.

This is 160 acres of Latham’s LH 4242 VT PRO planted April 18 in Clay County near Moorhead, Minnesota. This field is currently in the R2 stage (blister stage) where the kernels are white on the outside, with clear liquid inside. This is a great looking field of corn, but we could use rain to finish out strong at harvest! 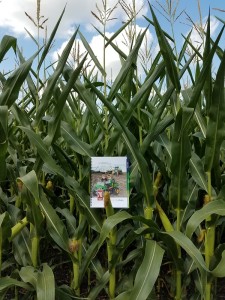 We’re having a great time at FarmFest! Be sure to stop by Latham Seeds’ booth (#4106) on Wednesday and Thursday to see the exciting new products we’re offering for 2018. 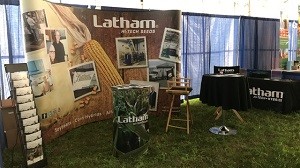 In Wisconsin, we have been spared the waterhemp resistance issues up until now.  Waterhemp is showing up in full force including the northwest, southwest, and northeast corners of the state.

Latham® Seeds Rep Clinton Buss discusses weed escapes with a customer in Southwest Wisconsin.  Ignoring weed resistance issue will only create more resistant weeds.  Now is the time to evaluate your herbicide program and plan ahead for next season.  Keep in mind that Latham’s product lineup includes options such as LibertyLink and Xtend Soybeans.  Contact a Latham® Seeds rep to discuss the best option for your fields in 2018. 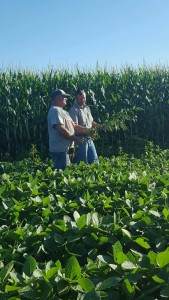 These future Latham® Seed reps are excited to try flying the drone over their family farm! We took good look at our Northwest Iowa Regional Plot.

These photos remind us of the importance of properly rinsing sprayer lines and tanks.

August is a key time for soybean fields to receive moisture. Soybeans in southern Minnesota are really taking off and growing rapidly now. It’s important to keep scouting as aphid populations are growing.

Managing your corn and soybean fields is critical now. Planes, helicopters and ground sprayers have been really busy this past week putting on fungicide. 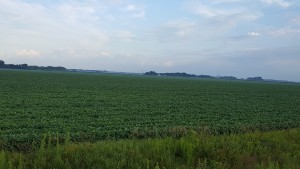 This field of LH 5939 SS was planted April 12 near Humboldt, in a corn-on-corn situation at 33,000 plants per acre. This field had some pollination issues due to very little rain in the last month in a half. Corn ears don’t look too bad, considering the lack of rain during grain fill.

Japanese beetles have been a problem in Eastern Iowa this summer, and some farmers are spraying for them now.  The economic threshold is 20% defoliation a reproductive growth stage in soybeans and 30% for pre-bloom soybeans. Also check your corn for silk clipping by the Japanese beetles.

Japanese Beatles are showing up in fields near Madrid, Iowa. It’s important to scout fields and note defoliation as treatment might be warranted. Also look in corn fields for leaf clipping.
Lack of moisture has been a problem for many fields across my territory this season, and we’re seeing signs of heat stress. For example, this field of corn near Cambridge is showing little tip back.

Just as Iowa Secretary of Agriculture Bill Northey states last week, much of the state is very dry. Farmers are hoping for a good soaking rain as we enter August, which is a critical time for soybeans. Pastures also are in desperate need of rain, and livestock producers hope much needed moisture will fall soon.