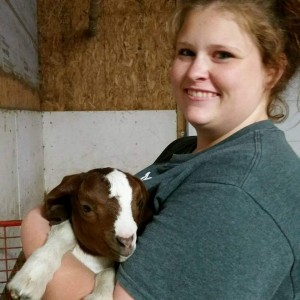 Josie discovered her passion for livestock production as 4-H member. She showed sheep from fourth through eighth grades. Her mom, Lori, was serving as the sheep superintendent at the Palo Alto County Fair and decided to start a goat show because meat goats were the fastest growing 4-H project at the time.

“That year we borrowed a doe from our neighbor, and I fell in love with showing goats,” says Josie. “Boer goats have so much personality. They act like dogs, and they’re so smart. I also enjoy kidding season. It’s so much fun to see all the babies run around.”

Josie started a goat herd during her freshman year of high school with two commercial does named Sweetie and Dot. One year later, her grandma bought her an ABGA registered doe. Her mom helped her name Wicky’s Rockin’ Boer Goats, which combines Josie’s love for both music and Boer goats. Josie names her registered goats after song titles. 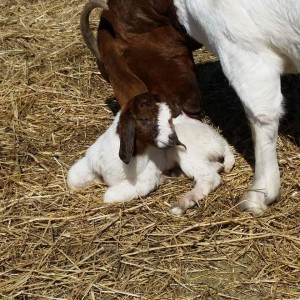 Since 2011, Josie’s goat herd has expanded to 75 head and she’s gotten involved with embryo transfers. Thirty does are recipients and several others are donor does.

“Trans-Ova has recently started offering reproductive technologies for goats, so I think you’ll see a lot more of it around here,” says Josie. “It’s a great way to improve your herd genetics without having to buy and house a buck. When it comes to selecting my donor does for flushes, I choose the ones that have the most desirable traits according to the breed standards.”

Raising animals that portray the best breed standards is important when your goal is to raise show-quality meat goats that can be sold to 4-H and FFA members. Josie’s efforts have been rewarded with numerous trophies from top shows across the Midwest, plus in high school she earned her FFA chapter’s Star Placement award.

Josie’s goals for her goat herd remain raising competitive show animals. Her long-term goal is to pursue a career that will allow her to continue raising Boer goats. She’s heading down the path for success by enrolling at Iowa State University. This spring she earned her associate’s degree from Iowa Lakes Community College, and this fall she’ll move to Ames where she’ll major in English.

Before she hits the books again, this girl has places to go. 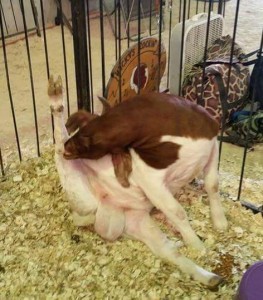 “My favorite show to attend has always been the Iowa State Fair,” says Josie. “I love all the questions I get from people walking by asking about my goats and what we do with them.  It reminds me that not everyone is lucky enough to grow up around animals.”

“When I was practicing baking these cupcakes for the fair, my dad kept coming in the kitchen and sneaking the rejects,” says Josie. “I always took a bunch of projects to the fair, but I always made sure that every year I took cupcakes of some kind.”

As a former 4-H member who enjoyed exhibiting baking projects, I know that “consistent and uniform” gets engrained in your brain. To this day, I look for consistency when plating baked goods. Here’s to all those 4-H and FFA members who are honing their baking skills for the summer fair season!

Put the chocolate in a heatproof bowl set over a pan of gently simmering water.  Do not let the bowl touch the water.  Leave until almost melted, then set aside to cool slightly.

Beat the butter and sugar together in a bowl until pale and fluffy, then beat in the eggs, one at a time.  Stir in the melted chocolate and cocoa powder.  Sift the flour into the mixture and stir in, then stir in the coffee, followed by the coffee beans.

Spoon the mixture into the paper liners and bake in the preheated oven for about 20 minutes until risen and a tooth pick inserted in the center comes out clean.  Transfer to a wire rack to cool.

Beat the butter, sugar, and coffee together in a bowl until pale and fluffy.  Spread the mixture smoothly over the cupcakes and sprinkles with grated chocolate.