Sample a Taste of Savannah with an Iowa-Irish Twist 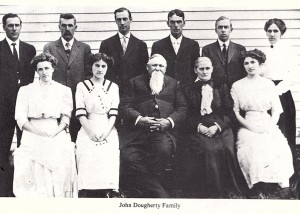 No one does St. Patrick’s Day like Savannah, Georgia—a pleasant discovery for an Iowa farm girl like me with proud Irish heritage and an insatiable appetite for America’s rich culinary heritage.

Maybe I inherited my love of good food from my great-great-grandfather, John Dougherty (the man with the impressive white mustache in the Dougherty family photo in this blog). An American success story, John was born in County Cork, Ireland, in 1848, came to America with his parents at age 10, grew up in New Jersey, worked in the rolling mills of Chicago and farmed in Illinois for 20 years. After he moved to Calhoun County, Iowa, in 1889, he purchased 200 acres and “placed the land under a high state of cultivation,” a legacy my family carries on today with our Century Farm.

With my Irish heritage, I felt right at home during a recent Iowa Farm Bureau trip to Savannah, which boasts the third largest St. Patrick’s Day Parade in the world. Oh sure, the city’s open container law that allows alcoholic beverage consumption on the street in the historic district also distinguishes the Hostess City, but Savannah’s diverse food scene is even more intriguing.

During the 3-hour First Squares Food Tour with Savannah Taste Experience Food Tours, our group tasted our way from restaurants on the riverfront (where the cobblestones in the streets once served as ship ballast) to pubs and bakeries near Savannah’s historic town squares. Along the way, we discovered the city’s surprising, savory culinary identity, which includes:

I might just mix up my own version of Chatham Artillery Punch while the green beer flows on St. Patrick’s Day. I’ll also be thinking of Savannah as I prepare my recipe for Beer-Braised Irish Stew and leave you with this Irish blessing: As you slide down the banisters of life, may the splinters never point the wrong way!

Darcy is a fifth-generation Calhoun County, Iowa, farmer, business owner, ag journalist, speaker, photographer and author of three books, including “A Culinary History of Iowa,” which is available at www.darcymaulsby.com.

1 (12 fluid ounce) can or bottle of beer (note: just about any beer will work, although a very dark beer like Guinness can impart a bitter taste)

Heat the vegetable oil in a large Dutch oven over medium-high heat until very hot. Brown the meat in 2 batches, stirring to brown the cubes on all sides. Return all the meat to the Dutch oven. Sprinkle meat with flour, and stir lightly to coat the meat with flour. Stir in onions, carrots, potatoes, celery, beer, beef broth, bay leaves, thyme, salt, pepper, garlic and Worcestershire sauce. Bring mixture to a boil; cover.

Place Dutch oven into preheated oven, and cook for 45 minutes. Uncover, stir the stew, and cook until the beef is very tender and the liquid is reduced by half, about 45 more minutes. Add peas, if desired, near the end of the cooking process. Remove bay leaves. Serve and enjoy!