Growing up on a farm in rural Cedar County in eastern Iowa, Kathy Wagner believed the “lucky” kids lived in town. They got to spend time each other’s houses while Kathy felt stuck in the country.

“It wasn’t until I grew older that I realized I was the lucky one,” says Kathy. “If you have roots in farming, hang on for dear life! There’s nothing better than breathing in the fresh morning air, experiencing the birth of a new calf, smelling newly baled hay, or watching beautiful crops grow in the field. It’s priceless being able to farm the same fields as your parents or grandparents did.”

Kathy grew up on a farm only about three miles from where she and her husband, Mike, have farmed together for the past 25 years. As a young child, she was responsible for giving a scoop of feed to each cow as it entered the stanchion to be milked and to feed her family’s two dogs. Her parents milked Holsteins, as well as raised row crops, stock cows, sheep, hogs and chickens. When she was five years old, her parents divorced. In the settlement, Kathy’s mother received part of the land and continued to raise sheep, beef cows, hogs and chickens. She rented out her farm ground.

“Much later in life I realized what an undertaking that was!” says Kathy. “My mom had chores and bookkeeping to do plus she raised five kids, so there wasn’t time for me to be involved in 4-H or FFA. I would have liked to have shown animals.” 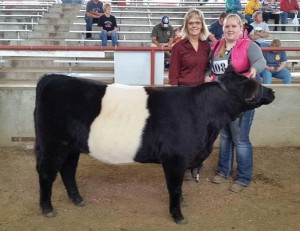 Kathy Wagner and her daughter Audrey show Belted Galoway cattle around the Midwest. Here they are at the 2015 World Beef Expo in Milwaukee, Wisconsin.

“Audrey begged for a Beltie (Belted Galloway), so we finally got one. By the time she graduated high school, Audrey had six cows,” says Kathy. “I was left with the cattle chores after Audrey graduated. I decided that if I was going to do chores that I might as well have a cow of my own. I got one. Six years later, we have about 35 purebred registered Belted Galloways between our two herds.”

Audrey and Kathy attend two or three shows each year in Iowa, Illinois and Wisconsin. They’ve also started to sell some breeding stock. There’s a sense of pride that comes along with building a herd and raising quality stock. Their bulls have gone to Texas, Oklahoma and Minnesota.

“I love the cows. I like taming the calves and breaking them to lead on a halter,” says Kathy. “Most of our cows have been in the show ring, so they are very tame. I love that they each have different personalities. Belties tend to be smaller and more docile than other breeds, and I like that, too.”

“Children learn responsibility from working with and caring for animals by being in charge of the their food, water, shelter, as well as some of the costs. It’s life lessons that aren’t as easily learned on the couch,” says Kathy, who has five children, two stepchildren and a grandma to 16 (going on 17). 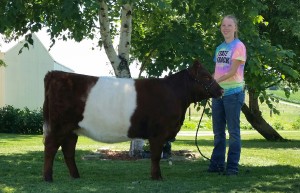 In addition to raising cattle, Kathy farms in partnership with her husband. She says they’re co-bosses and pretty much consult on everything. She appreciates the opportunity to farm the same ground her father farmed.

“My dad passed away nine years ago, so we rent ground from my stepmom. She’s one of the strongest women I know,” says Kathy. “My stepmom continues to manage all the farms and properties that she and my dad owned.”

Kathy was blessed by strong female role models while growing up. As a result, she didn’t think twice about doing chores or running farm equipment. She ran the field cultivator until she and Mike started practicing no-till methods of farming. She also used to haul corn and soybeans from the field to the grain bins until Mike convinced her to run the combine. Now Kathy operates the S660 JD combine while Mike hauls the grain.

Kathy steps down from the combine to check on cows that are calving as most of their cows calve in the fall; just a few calves are born between February and March. She also does the bookwork and keeps the cattle records; she and Mike both do chores.

Active in her community, Kathy has served as church organist since she was in fifth grade. She also accompanies the concert choir at the Tipton High School.

FarmHers across rural America are the heart of their homes and communities. Kathy says she’s seen even more women become involved in agriculture in recent years.

“Farming is a great occupation but it’s not easy. There are days when you spend long hours in a cab and there are days when all the animals need clean pens. You must do chores in 20-below wind chill, on days when the mud is up to your knees, and when it’s 95 degrees in the shade. There are days you will envy those 9-to-5’ers! But when you look around at your land, animals and crops, you feel a sense of pride and it’s all worth it.”