Live “High on the Hog” during October Pork Month

There were many issues I thought about addressing in this week’s blog: the presidential debates, the effects of flooding, plus Midwest farmers in the heart of fall harvest. Because I tend to tackle a lot of serious topics, today I decided to blog about something lighter. October is Pork month, so let’s talk #bacon! 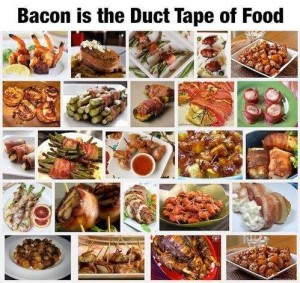 “Bacon” is the one farming-related topic that you can Google and receive overwhelmingly positive responses. Meat candy is universally loved! Bacon is so beloved that Americans even ignore the false information put forth by government officials, who are charged with keeping us “healthy.”

Researching a topic that I’m writing about isn’t usually fun. Researching this post, however, has been a delight! As a disclaimer, I admit that not a lot of research is needed for many of my blog posts. I mostly write about my own experiences because I want to share what I know firsthand.

Our firsthand knowledge and experiences are what form our opinions. I’m always preaching that we must listen to the thoughts and beliefs of other people. This blog allows me to share my thoughts and beliefs with others. I’ve been totally immersed in farming my whole life, going back to the “good old days” of the fifties and sixties. We’ve learned so much about soil health and water quality since then, and I like to talk about the agricultural advancements that have been made.

But some things are so good from the beginning that “vast improvements” aren’t needed. Bacon has been nearly perfect for centuries! 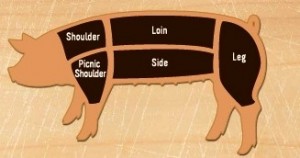 Did you know that bacon was originally known as the meat of the common man? Higher priced cuts, such as pork chops and loins, were consumed by people who had more money. The “pork belly,” where most bacon comes from, was considered less desirable.

Here’s another fun fact you may not know: Bacon was originally salted to preserve meat before there were refrigerators. Cold farming regions could preserve some food better than warm farming regions. , so climate is a reason that some foods are grown in certain areas and not others. As you think about the world as a whole, there is so much diversity in agriculture because of need. It’s not just soil types that determine a crop. (“Soil type” is a common phrase to us farmers, but perhaps it’s not universally understood. NOTE TO SELF: Write future blog about how soils and climates affect what crops can be grown in an area.)

Now back to the good stuff… The high demand for bacon today has made pork belly the highest priced cut of pork. Pork bellies used to be a drag on the price of a pig I took to market, but now it’s the price leader. And for good reason!

Bacon enhances the flavor of any food. We all think of putting bacon on our burgers or using bacon to add flavor to green bean casserole. But have you tried bacon covered in chocolate? I’m not a big fan of chocolate, but I’ll eat it on bacon!

Anything wrapped in bacon is an instant appetizer… anything! A few years ago on a Franklin County Harvest Tour for bloggers, I tried mealworms. I’m not a fan, but maybe I could learn to eat mealworms wrapped in bacon. Just maybe.

People love their bacon so much that rock stars are singing about it. There are Facebook pages and festivals devoted solely to bacon. Touted by National Geographic’s Traveler magazine as “Iowa’s Best Food Festival,” thousands of tickets for the bacon festival in Des Moines literally sell out in minutes!

While celebrating pork this month, remember all the ways to enjoy your food. And, yes, enjoying food is what we need to do! The food fear mongers have an agenda. If you follow the money of any group that is against bacon, you’ll discover their motive. Bacon is the antidote to veganism!

Go ahead and enjoy that BBQ Bacon-Wrapped Pork Loin and Bacon Ranch Slow Cooker Chicken. Pig out on that patty melt! It’s Pork Month after all. Live high on the hog!