Flying the Fields with Logan Shedenhelm 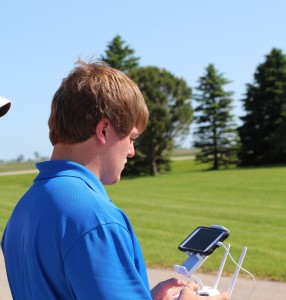 Originally from Northeast Iowa, Logan Shedenhelm has found a new tool for his family’s farming operation that yields high results. The Shedenhelm’s could now scout their field in a timely manner, learning more than they ever have.

“My summer internship with Latham Hi-Tech Seeds helped me see the value of having an eye in the sky over our fields,” said Logan. “From making a sales pitch to improving our own operation, I have been able to uncover many things just from a different angle.”

This past summer, Logan flew the Phantom 4 and admits that this would be the model to invest in someday. Between the ease-of-use and high-quality camera image, Logan found this was a durable, all-in-one drone.

“Drone technology can be beneficial to a farming operation if used properly,” Logan said. “Drones can be used to see every single acre you farm or to view livestock in the pasture in a time-effective way.”

Logan found different uses for his drone from season to season. Starting with planting and early spring, he used the drone to look at emergence, stand and weather damage. In mid-season, he used the drone for weather damage, weed pressure and chemical injury. Coming closer to harvest, he was able to see where fields began to tassel or where disease pressure was taking over.

Later in the season, it was easy to see compaction when flying the drone. Certain rows which look like there where from machinery, where shorter and lighter in color. These symptoms were from compaction.

“Drones can be a great investment and pay for themselves in just one year if used properly,” Logan said. “I was able to always find a reason to check fields no matter what the season. It is a benefit to see every field from a weekly basis instead of being blindsided by something that your drone could have seen when harvesting your crops.”