David Irons met the love of his life in 1989 when they were both working in the same office in Des Moines.  Although David and Patty had both grown on up farms – he on a cow-calf operation in the Altoona-Runnells area and she on a feeder cattle-row crops operation in North Iowa –  farming fulltime wasn’t something they had thought about much. After all, they had grown up during the 1980s Farm Crisis and moved to the city for stable paychecks and promising careers. 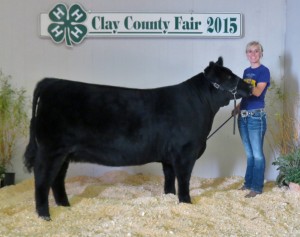 Lisa and Coral at the Clay County Fair in September 2015

Then, as it often does, life handed the young couple a curve ball. Patty’s father was diagnosed with terminal cancer in 1992, so the Irons had a decision to make. They chose to move to Northwood to become a part of the family farm and make a fresh start. They moved to the farm in January 1996 after Patty’s mom moved to town.  Over the years, they’ve remodeled facilities. They put a new roof on the barn in 2009 and tinned it in 2013 to make a nice area for the girls to store show equipment and fit cattle.

Fitting is something Lisa, a junior studying Animal Science and beef production at Iowa State, enjoys and has become known for. She also enjoys showing cattle they’ve raised themselves and was proud to have produced the top selling heifer at the 2015 Worth County Club Calf Sale.  This is the last summer Lisa is eligible to show in FFA. Both Lisa and Mary showed at the Worth County Fair in June. They plan to show at various open shows in July, the Iowa State Fair in August, and the Clay County Fair in September.

The Irons have shown in many Iowa Junior Beef Breeds Association shows, including Beef Expo. Lisa has also shown at Ak-sar-ben in Omaha and the Minnesota Beef Expo in St. Paul.  Lisa has led several clinics for beginning showmen.

“Giving presentations and leading fitting demonstrations has helped me develop confidence, overcome my fear of public speaking and cope with anxiety,” says Lisa. “My 4-H and FFA beef project has helped me develop so many skills, meet many people and led me toward a career. My dream is to graduate from college and farm with my dad.” 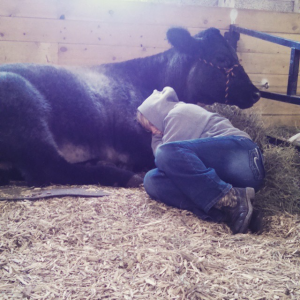 Lisa started showing cattle as a third grader when she entered a bucket bottle calf in the county fair. She brought that heifer back the following year.  Mary followed in her sister’s footsteps, starting with bucket bottle calves.  As a N-K High School Senior, she plans to bring her first heifer back as a cow/calf pair to the 2017 Worth County Fair.

As the girls have grown, so has their beef herd. They began with Maine-Anjou and have added more Simmental, which had more genetic resources available. Plus, the Simmental are known as a pretty docile beef breed that makes them good show animals. The Irons have focused on developing better and better stock, selling off animals and then using those proceeds to purchase better genetics.

Most of their steers are sold to local feeders, but they feed out a few to sell directly to consumers. Female calves are kept as replacements or sold as bred heifers to other beef operators.

“My dream is for my kids to find something they enjoy that provides a good life, as well as a good living, and to pass this farm to the next generation.” 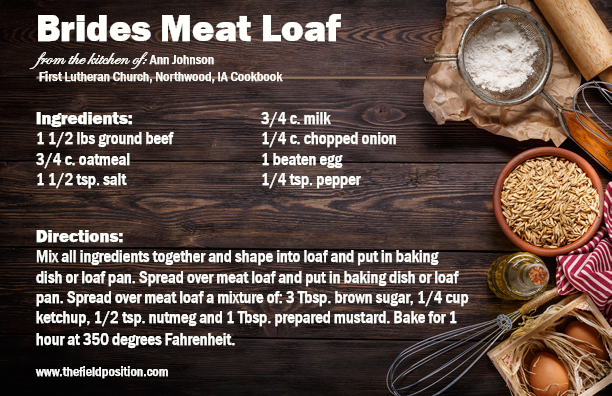 COOK’S TIP: This recipe can be frozen and baked later, so sometimes I put this in two baking dishes and bake one and freeze the other.