As farmers, we hear over and over how important it is to be involved in the political process, talk to legislators and tell our story. Finding the time to commit to that effort is the hard part with livestock, day jobs and families to care for. If you own a business, farm, or teach in the classroom the time has come for you to join in the conversation!

At the close of December 2015, small business owners and farmers across the nation breathed a sigh of relief as the federal government passed a bill to permanently provide for Section 179 small business expensing and Bonus Depreciation. We now had certainty in two key planning tools for making capital improvements to our businesses. Step two of the process when the feds finish their work, is to wait for Iowa to follow suit and “couple” those tax provisions into the Iowa code.

What nobody saw coming was our state leader, a long-time supporter of small business and agriculture, recommending that Iowa leave these essential tools out of the Iowa code for 2015 taxes. (Yes- 2015. The fiscal year that’s already passed!) That means a year of consistently monitoring financials, carefully planning purchases and doing all we could to keep our business in the black on a down year was for naught. I felt like the rug had been pulled right out from under me. A bit dramatic? Here’s why it matters to me this year in particular:

In 2014 we suffered a fire on the farm. Our grain dryer went up in flames totaling the entire unit. We waited months for the insurance company to make their evaluation and deem the fire an accident. Meaning our purchase for this critical piece of equipment had to fall in the 2015 crop year whether it was a good year to purchase it or not. (If you haven’t been following ag economy lately- the answer is NOT!) Our purchase and rebuild of our grain dryer is done, but now we must figure out how to come up with funds to cover an extra $60,000 in tax liability. Yes, with the exclusion of this tax code, the governor just asked us to write a check to the state of Iowa for just over that amount. This means we either take out a loan to pay Iowa, OR sell stored grain at an extremely depressed price just to cover this bill. Neither of which we had planned to do at this point in 2016! (Did I mention we just rebuilt the dryer that prepares our grain to be stored until we ARE ready to sell it?)

So why am I asking my Senator to help? Let’s first rewind to January 28th.  The House of Representatives Ways and Means Committee put together a proposal to get Section 179 expensing back into Iowa’s Tax Code- House File 2092. On January 28th the Iowa House of Representatives passed the plan with overwhelming BI-PARTISON vote of 82-14. This bill is important to Iowa Farmers, but also includes provisions of support to other groups including: 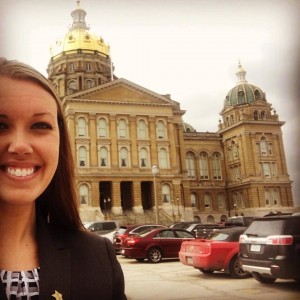 Last week I was asked to take part in a press conference to share my story about how Section 179 affects my small (farm) business. On the panel alongside me was a CPA, owner of a few Des Moines based fitness franchises and a teacher. During that press conference, several key points were brought up:

Education, Small Business and Agriculture are some of the most important assets we have in rural Iowa communities. This is legislation that affects 177,000+ people. Senators, the ball is in your court. We’re asking you, please to do what’s Right for rural Iowa and move on House File 2092!