“Will to Win” is Common Denominator Among Cyclones & Cancer Patients

For the fourth year in a row, Latham Hi-Tech Seeds has partnered with two other Iowa companies to support the Cyclone Charity Stripe. This promotion raises money for every free throw that the Iowa State Cyclones Men’s Basketball team makes during the basketball season, and donations benefit the American Cancer Society through Coaches vs. Cancer.

Coaches vs. Cancer was championed by Norm Stewart, 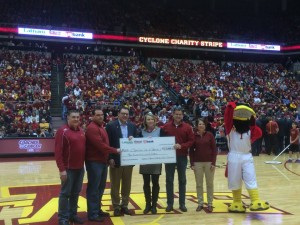 former head coach of the University of Missouri men’s basketball program.  As a cancer survivor and member of the National Association of Basketball Coaches (NABC), Stewart challenged fans to pledge a dollar amount for points made by his team.  The American Cancer Society and the NABC adopted that concept in 1993, transforming it into a nationwide effort “to provide help and hope to people facing cancer.”

Providing help and hope to people facing cancer is something our family is passionate about due to first-hand experience. On February 20, 2010, former Latham Seeds’ president Bill Latham underwent a stem cell transplant to battle Acute Myelogenous Leukemia (AML). That transplant was extended his life more than five years, and we are grateful for the great care he received until he lost his earthly battle July 31, 2015.

Bill, father of John and Chris, was an avid Cyclone supporter and a season ticket holder for both football and basketball. He would have loved the will to win on display last Saturday when the 14th-ranked Cyclones defeated No. 24 Texas in an 85-75 victory in a packed Hilton Coliseum. In the first half, Georges Niang scored 13 consecutive ISU points, including three consecutive 3-point baskets.

During a break in the action last Saturday, three Iowa companies were recognized for their support of the Cyclone Charity Stripe. Latham Seeds is proud to support this great cause for four consecutive years. Click below for a season-by-season recap of our donations: