Time for a bold plan for a better Iowa 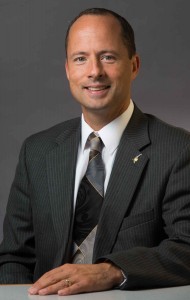 The nation’s longest-serving governor has always been ready to take on a challenge.

And as another legislative session gavels in today (Jan. 11), Iowa Gov. Terry Branstad will propose the biggest and boldest initiative he’s put forth as the state’s chief executive.

Those are his words, not mine.

The legislative proposal, to be a signature piece of his State of the State Address tomorrow, would increase funding for education and water quality initiatives without raising taxes.

At the heart of the proposal is a 20-year extension of the Secure an Advanced Vision for Education program (SAVE). Enacted on July 1, 2008, SAVE dedicates one penny of the state’s six-cent sales tax for school infrastructure projects, or $3.2 billion since its inception. With SAVE to sunset in just 13 years, school officials are already finding it difficult to secure bonding for needed improvements to facilities and classrooms.

Branstad’s proposal would provide stable and long-term funding to schools by extending SAVE through Dec. 31, 2049. It would guarantee schools a minimum projected base of $458 million annually plus the first $10 million in anticipated annual growth beginning in fiscal year 2017. Combined, these revenues would total an estimated $20.7 billion. 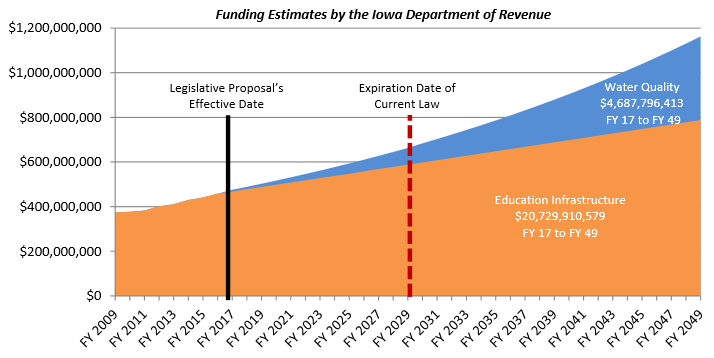 As you can see from the trend line, Branstad’s proposal solidifies the SAVE program through 2049, allowing schools to continue to plan for bonding school infrastructure (same steady increasing trend shown in orange) while avoiding any further implications on taxpayers. The blue portion indicates the part of pre-existing tax (GROWTH portion only) to be used to fund water quality initiatives in Iowa. Two very important issues in need of support from Iowans.

“This plan works for schools, farmers and Iowa,” Branstad said. “It funds school infrastructure improvements over the long term and spurs greater collaboration and implementation of the state’s nutrient reduction strategy.

“The challenges associated with water didn’t occur overnight and they won’t be solved overnight,” he added. “But we can make real and meaningful progress without raising taxes.”

It’s an intriguing concept. Schools and water quality are both priorities for Iowa and several prominent school administrators favor SAVE’s extension sooner rather than later.

Dr. Paul Gausman, superintendent of schools for the Sioux City Community School District, attended the Jan. 5 news conference at the statehouse and said SAVE’s extension is critical as educational facilities continue to age. The proposal, he said, would allow schools to move important infrastructure improvements forward. That’s critical in many communities, including Sioux City, were deteriorating facilities need attention and in Waukee, where new facilities are needed.

Waukee Superintendent of Schools David Wilkerson disagreed with reporters who, during the news conference, said Branstad’s proposal would divert funding from education to the environment.

“We’re not taking anything away from schools because, without enactment of this proposal, there’s no guarantee that the one-cent sales tax will be renewed when it expires in 2029,” Wilkerson said.

“It’s also important to note that our schools do not exist in isolation in our communities,” he added. “We depend on a strong farm economy and our farmers. We look forward to working with them on this important issue.”

Wilkersons points are extremely valid. After all, there’s no guarantee that schools will be capable of bonding as the clock ticks down to 2029. Nor is it a sure thing that Iowa’s governor and the state legislature will renew it in 2029, or before, for that matter.

“I believe that what the governor has outlined will lead to better water quality and greater collaboration,” he said.

When asked by reporters to handicap the odds that the proposal would gain favor among lawmakers, Vilsack pushed back.

“You don’t want perfect to be the enemy of good. And if someone has a better proposal, than put it on the table,” he said.

Iowa’s former governor also summoned a spirit of collaboration – one that Iowans have long been known for.

“We’re all in this together,” Vilsack said. “This is an Iowa problem and the only way it gets solved is to work together in a collaborative way. If this doesn’t get solved, farmers won’t know what to do, lenders won’t know what to do and communities will suffer. It is about being big and bold and dealing with realities of today.” 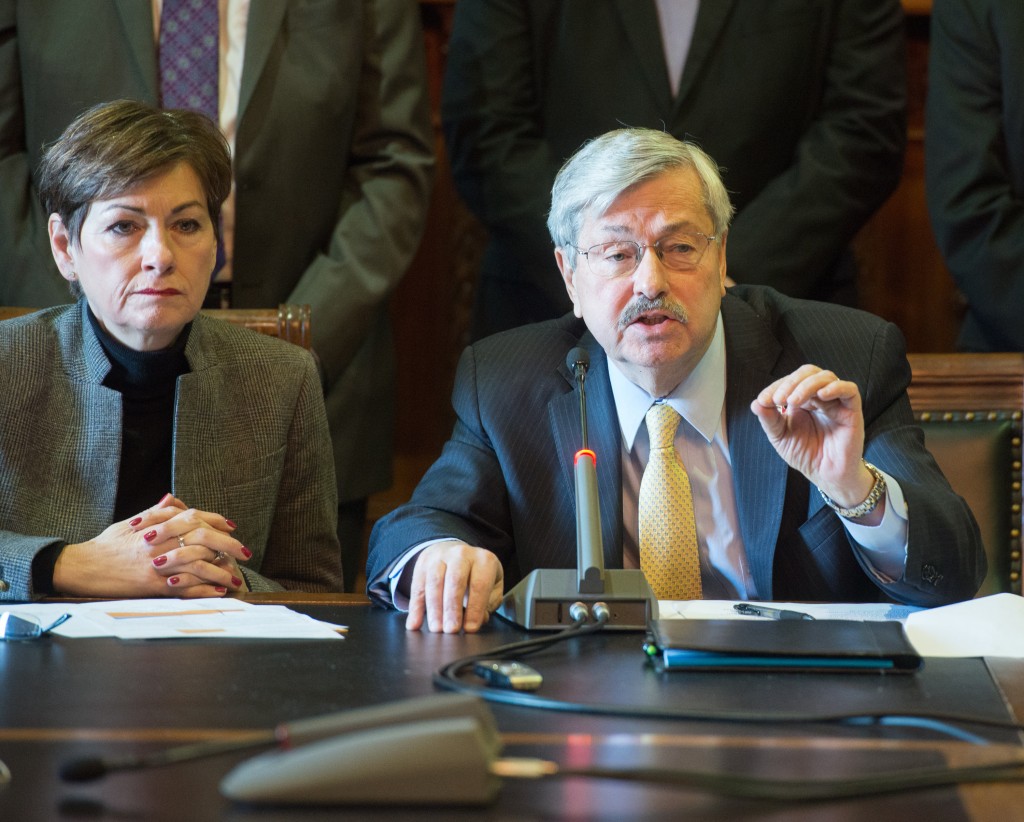