Mid-season crop scouting is especially important because different insect and disease pressures become evident at this time of year. Any type of stress greatly enhances the likelihood of opportunistic insects such as corn leaf aphids, European corn borer and armyworm to feed upon plants.  In soybeans, we might see soybean aphids, two-spotted spider mites and Japanese Beetles.

There hasn’t been a great deal of insect or disease pressure yet this season, but that doesn’t mean we can rest on our laurels. High humidity and heavy dew creates ideal conditions for diseases like Northern Corn Leaf Blight (NCLB). Fungal diseases like Sudden Death Syndrome are more evident in late July and early August, too.

Taking field notes now can help farmers develop a fall harvest plan. They’ll want to keep a close eye on stalks that have been damaged because those will be prone to stalk lodging, ear dropping and repeat infestations. Field notes also will help these farmers choose seed for 2016 planting.

One reason stalks may be damaged is from corn borer feeding. At this point in the season, corn borers have burrowed into the stalk and foliar applications are no longer effective.

Black cutworm could be a larger problem this year as they’re known to cause more damage in fields where corn is planted later.  Fields of higher risk also include those that are poorly drained and low lying; those next to areas of natural vegetation; and those that are weedy or have reduced tillage.

Also due to the wide variance in planting dates, rootworm beetles may move between fields in search of the best “buffet.”  A late maturing corn field may attract a large numbers of beetles if neighboring corn stopped producing pollen, for example.  Rootworm beetles may also move into corn and/or soybean fields that have an abundance of pollen-producing weeds, including volunteer corn, ragweed or foxtails.

Controlling weeds will help control corn rootworm populations, as well as other insects like Two-spotted Spider Mites and aphids. Mites and aphids begin feeding along field edges, especially in weedy areas, before eventually developing into a field-wide infestation. Many common insecticides aren’t overly effective on Spider Mites, so carefully read the labels of any products. 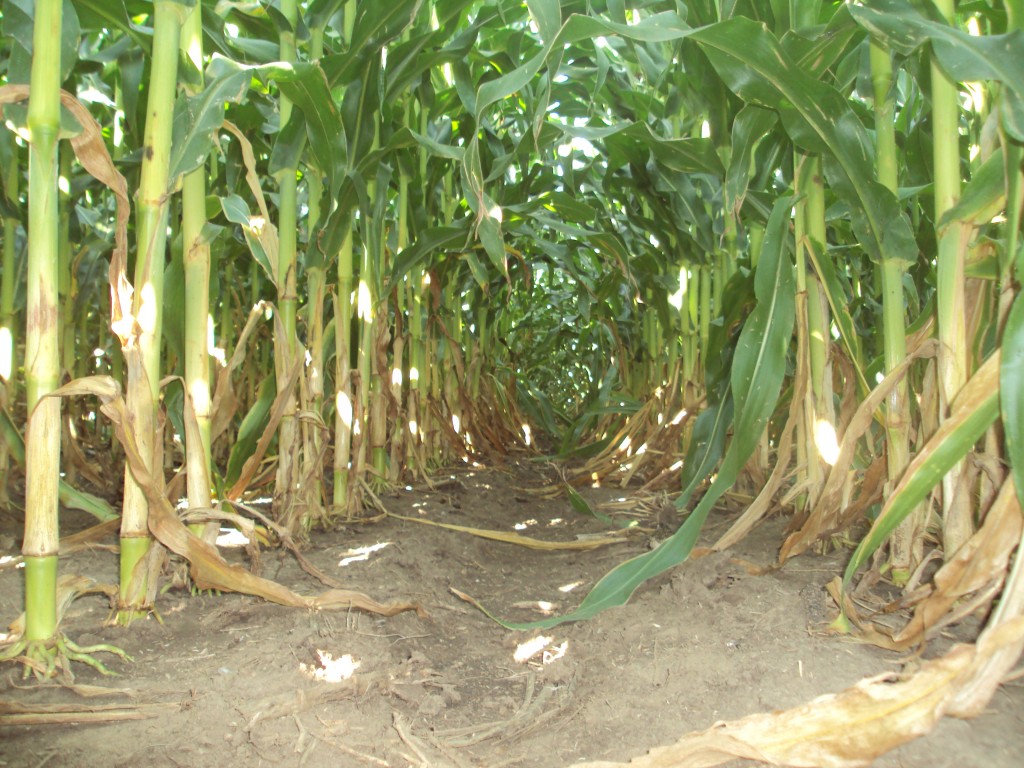 Another insect to watch for in both corn and soybean fields is Japanese Beetles. These beetles will literally eat anything that’s green! They seem to prefer the leaf tissue between the veins of soybean leaves and the soft silks of corn plants.  Both activities can result in significant yield loss, so that’s why it’s especially important to scout for Japanese Beetles.

If you’re seeing Japanese beetles now, make note and watch from them again in early spring. Adult Japanese beetles emerge around early to mid-June and begin feeding on low-lying plants. They eventually move to trees and field crop foliage where they feed and mate. Mated females move back to grass in August and September to lay small egg masses in soil cavities. The eggs hatch into small grubs that feed on roots underground until late September when the temperature cools. The almost fully-grown grubs burrow down in the soil and remain inactive all winter. In the early spring, grubs become active again and feed until turning into resting pupae. The pupae hatch into adults and emerge from the soil – and the cycle begins again!