DAIRYING HAS BEEN THIS FAMILY’S BUSINESS FOR 87 YEARS… & COUNTING

Ray Beutz is proud to be a third generation dairyman in Stearns County Minnesota. His grandpa moved onto the family farm in 1928. His father was born here. It’s also where Ray and his wife, Jean, are raising their three children: Matthew, 21; Miranda, 19; and Brian, 12. 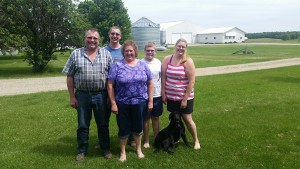 Ray and Jean Beutz are raising their three children on the same farm where his father was born and raised. Pictured in the back row, from left to right, Matthew, Brian and Miranda with their dog, Molly.

“Our kids have literally grown up on this farm, and I can’t think of a better place to raise a family,” says Jean, who was raised on a nearby farm where they raised hogs and beef cattle. Although she wasn’t raised on a dairy, Jean has been Ray’s partner for the past 22 years. She helps wherever she’s needed, from filling the feed cart to feeding the heifers, dry cows and calves.

Ray adds, “Our kids have developed a strong work ethic and they know the value of a dollar.” Those two lessons that have been passed through the generations as Ray’s grandfather fought in World War I and his father grew up in the Depression. Ray attended high school during the 1980s Farm Crisis when many dairy herds across the state were being sold en masse. Fortunately, Beutz Dairy was in a position that allowed Ray to begin milking when in 1984 when he graduated high school.

Seven years ago the Beutz family faced the decision of whether to undergo a massive remodel of the original barn or to build a new dairy barn. With several years before retirement – and the possibility of having a fourth generation join Beutz Dairy – they decided to invest in a new dairy barn with a swing 10 parlor. It actually turned out to be a “swing 11” to increase worker safety, but Ray says “it’s the cat’s meow” when one person is doing all the milking. One group of cows gets milked while cows on the other side are prepped.

Beutz Dairy has 125 cows with 110-115 in the milking string. They also raise corn, soybeans and alfalfa. In addition, they recently took on a Latham® Seeds dealership. One reason Ray says he chose Latham is because the company has a long history. Like Beutz Dairy, Latham Seeds is a multi-generational, family-owned business being operated by the third generation.

Latham has developed a reputation for top-performing products, which Ray says is evident by the number of top placings. In fact, Latham corn and soybean products scored 280 Top 10 finishes in the 2014 F.I.R.S.T. Trials in Iowa, Minnesota and South Dakota.

“Genetics are genetics, whether you’re buying cows or seed,” says Ray, who sold a competitive seed brand for about a decade. “I’ve always enjoyed learning about seed products, including new traits and technologies. I really like all of the options that Latham Hi-Tech Seeds has to offer from (Genuity®) Roundup Ready 2 Yield® and LibertyLink® soybeans to everything from Bt hybrids and (Genuity®) SmartStax.”

“That’s the kind of diversity you can only get from an independent company,” adds Ray. “Plus, Latham’s products are supported by great people. There’s just a phone call away when I have a question. I’ve enjoyed working with Corey Catt (Latham Forage Products Manager) in the past, and I’m really looking forward to working with him again now. Corey understands that high-quality forage produces high quality milk and drives productivity.”

With a seed dealership, a dairy and a farming operation – plus a house filled with three children who are on-the-go – Ray and Jean cherish family time around the dinner table. One of their family’s favorite side dishes is cheesy potatoes. Sit down with the fam this weekend and celebrate June Dairy Month!

1 can cream of mushroom, celery, potato or cheese soup

Cube potatoes or use 1 package of frozen hash browns, thawed

In a saucepan, melt together butter and cheese. Stir in soup and onion. Then add potatoes. Mix well and top with 1 cup crushed Cornflakes.