Emerging leaders need mentors to guide them, as well as a network of peers to reassure them they are not on the journey alone. That’s how generations of the Brown family and other Franklin County 4-H members became champion livestock judges and successful business professionals.

“This tradition goes back to the 1920s for many local families, including ours,” said Mike Brown, a former member of the Reeve Hampton Hustlers, who is now the senior director of livestock operations for Merial, a leading global animal health company.

Mike credits his father, J. Kent Brown, with encouraging he and his brothers’ participation in 4-H. Kent attributes his involvement in 4-H to his father, J. Verald Brown, who was inducted into the Iowa 4-H Hall of Fame in 2002. J. Verald Brown joined 4-H in 1923, just five years after the first 4-H club was organized in Franklin County in 1918.

J. Verald Brown was influenced by V.B. Hamilton, a Franklin County agent in the 1920s and 1930s who played a key role in local 4-H history. “V.B. Hamilton sparked the fire for livestock judging in this area for generations,” said J. Kent Brown, a former member of the Mott Meat Makers 4-H Club who judged swine, beef cattle, dairy cattle and sheep. 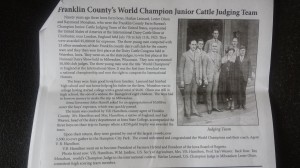 Through the years, many Franklin County livestock judging teams won not only regional and state, but national and international competitions. In 1925, the Franklin County Farm Bureau’s Champion Junior Cattle Judging Team of the United States (coached by V.B. Hamilton) represented America at the International Dairy Cattle Show near London, England, from July 7-11, 1925.

After winning the world champion title and a $250 gold trophy, the team of Iowa farm boys and Coach Hamilton received a hero’s welcome at home. They were greeted by 3,500 people—one of the largest crowds to ever gather in the Hampton City Park.

This legacy of excellent carried through to the 1950s and 1960s, when livestock judging workouts were held each summer at different farms around the county. “A lot of the parents would come along with the 4-Hers so they could learn, too,” J. Kent Brown recalled. 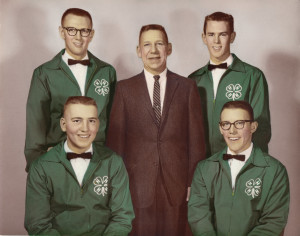 “Judging teaches you to make decisions, support your reasoning and communicate clearly,” said J. Kent Brown, who worked for the American Angus Association after college before returning to farm in Franklin County.

The value of these lifelong skills can’t be underestimated, added Brown’s son, Layne, who runs an insurance and financial planning firm in Pleasant Hill. “Through 4-H, I learned how to set goals, track progress and work as a team. Not only did it develop my work ethic, but I met a lot of great friends, too.”

These connections endure, added J. Kent Brown. “I’ve been fortunate to have lifelong friendships with people all over the county, state and nation, thanks to 4-H.”

One of these friendships includes Jay Van Wert, a long-time farmer from Hampton, whose family often relied on this favorite recipe when they were busy with 4-H activities.

Egg and Cheese Bake
(This casserole can be prepared the night before, refrigerated and baked in the morning.)