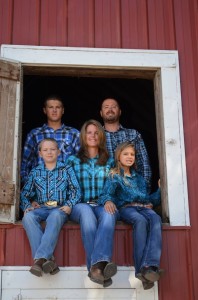 When John Lacina was a young boy, he literally walked in his dad’s shadow. He loved helping with chores, and he knew he wanted to grow up and be a farmer. Even though John was only 7 when his father passed away, his dream lived on – and became a reality thanks to hard work and determination.

“What I enjoy most about farming is the chance to create something new each season. You prepare the soil and put seeds in the ground. Then you do what you can to help the crop thrive throughout the growing season and hope you harvest your best crop yet each fall,” explains John. “You’re responsible for managing that crop. When you see the results, you’re either going to kick yourself or give yourself a pat on the back.”

Personal responsibility, true grit and determination defines him. In 1995, John graduated from high school in May and turned 18 in July. In September that year, he married his high school sweetheart. John and Niikia (pronounced na-key-a) had spent their high school years side-by-side. Niikia wasn’t raised on a farm, but she realized helping with farm work or riding in the tractor was a way to spend more time with John.

“There wasn’t going to be money for a movie if John didn’t earn it first,” says Niikia, “so I would help him cut eye teeth (on pigs) or whatever needed to be done. Sometimes I just rode in the tractor or combine – and still do – to keep him company during the busy seasons.”

As newlyweds, John and Niikia took off-farm jobs to help fund their dreams. John started as a floater operator at a local co-op, and spent all of his “free time” helping two local farmers. The long-term goal was for John to buy into Danny Dencklau’s farming operation over time, but fate moved up the time table.

Sadly, Danny developed cancer and John left his position at the co-op to assume more of the day-to-day responsibilities with Danny’s farm and his trucking business. John and Niikia had to decide whether to finish buying Danny’s half of John’s semi or whether to sell the truck. After Danny passed away, the Lacinas had to determine how they were going to buy ground and equipment to continue farming.

A local banker and a few others from the community had faith in the young couple. Today John is happy to be farming full-time and operating a Latham® seeds dealership. Niikia works off-farm as a Health Insurance Agent for KHI Solutions. The couple feels blessed to raise their three children on a farm where they can chase their own dreams.

Their oldest son Alan, 17, is a junior in high school. He loves everything about farming. “From the time he could walk, Alan was my shadow,” says John. “He’s happiest when he’s behind the wheel of a tractor. He’s also enjoys snowmobiling and four-wheeling.”

Their 13-year-old daughter, Kaylee, is an accomplished barrel racer. She got her first barrel horse when she was seven years old. In 2014, she started competing in larger events through the Professional Rodeo Cowboys Association (PRCA). In her just her third PRCA race, she placed 3rd out of 50 racers. Kaylee also won a saddle as the 2014 Senior TMRA Barrel Racing Champion with her 8-year-old Palomino named Scarlett Bandit.

The Lacina’s youngest son, Adam, has been riding Tuff-N-Nuff Miniature Buck-N-Bulls for seven years. He got interested in bull riding after seeing live Pro Bull Riding (PBR) events and watching the movie 8 Seconds, based on the life story of Lane Frost. Adam won a Tuff-N-Nuff event in Fort Dodge when he was just 4, and he’s placed in the Top 5 every year since. He finished in second place over all in 2014, just one point behind the first place Junior Bull Rider. Adam also qualified for and rode January 10 at the 2015 National Western Stock Show & Rodeo (NWSS).

“We’re making memories,” says Niikia. “Rodeos are something we enjoy watching and our kids enjoy participating in. We also like camping together and spending time with other families who share similar interests.”

Working and relaxing together is the Lacina family’s mantra. Today they’re sharing a favorite recipe that hits the spot, especially during the fall harvest season when a home-cooked meal on weekends is an extra special treat. It also sounds like a perfect recipe to celebrate the Super Bowl – or to enjoy any Sunday Supper.

from the kitchen of Niikia Lacina