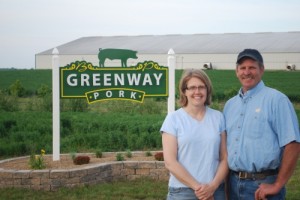 Brad and Peggy Greenway from Mitchell, South Dakota, believe it is important to share their family farm story with others.

They both actively talk about how their family farm has changed over the years to provide better care for their pigs. And while they go about it in different ways – Peggy using social media (#RealPigFarming) and Brad speaking in front of numerous groups – their goal is the same: to continue to tell the real story about their family farm.

Social media allows Peggy to share with others the many things that happen on the Greenway’s farm every day. From taking care of newly weaned pigs as they come into their barns, vaccinating pigs to prevent diseases, to explaining how they work with a swine nutritionist to make sure their pigs are getting proper nutrition, Peggy shares it all.

Brad, on the other hand, shares their family farm story by speaking to organizations across South Dakota and the nation. He became involved with the Pork Checkoff’s Operation Main Street program in 2004. The program provides public speaking training and coordinates speaking engagements in each participant’s local area and home state.

Locally, Brad has spoken to over 100 groups including civic groups, dietetic and food service associations, county commissioners, zoning boards, and high school careers classes. Nationally, Brad has given pig farming presentations to major grocery retailers and packers and processors. He has also participated in some events where high profile food writers and bloggers were in attendance.

“As someone who has terrible stage fright, I admire Brad’s ability to remain friendly, open and honest with people, even when asked very difficult questions,” said Peggy. “He is passionate about the pork industry and has devoted hundreds of hours over the years to communicate about the exciting improvements we’ve made regard animal care, reducing the use of natural resources and of course about the nutritious and delicious pork all pig farmers provide for consumers.”

Peggy didn’t grow up on a farm and says she had to learn everything from scratch. “We worked extremely hard when we first started farming just to be able to make ends meet. Farming is not a glamorous life. It is filled with long days, a constant battle with weather and prices, and many other variables, too numerous to mention. After 31 years of working hard and embracing changes and improvements in pig farming, I can say we are proud of our farm. Our two modern pig barns help us provide better care for our pigs than ever before. There is an overwhelming feeling of accomplishment in seeing our pigs comfortable every day of the year.”

The Greenway’s own a wean-to-finish pig farm that markets 10,000 pigs annually. They also have 200 beef cows and raise corn, soybeans, wheat and alfalfa on their family farm in South Dakota.