Regardless of Perception, Do What’s Right

In the past, I’ve written before about how people have different perceptions of farming based on their background and experiences. I’m bringing it up again because perception is becoming a very important word in the food debate. Just the other night, I heard someone say that our food is too cheap and that’s causing us to make poor food choices. The last I heard, 6.6% of American’s disposable income is used to buy food. That is much cheaper than any other country, but is food really too cheap? I’m sure a young, single mother trying to feed her kids will have a different perception of food costs!

Animal welfare is another area where perceptions often vary. The group of pigs I am now taking care of, are not the healthiest pigs I’ve had. Because of PEDV virus, it has taken an entire month – and 8 semi loads – to fill the barns. The first two deliveries brought me pigs that were very uneven in size, but the pigs appeared healthy enough. When I unloaded the last bunch of pigs, however, I knew immediately that I was going to have problems because I recognized symptoms of the PEDV virus. 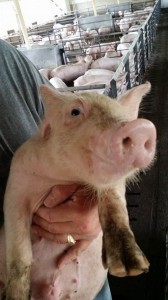 After spotting symptoms of the PEDV virus, I moved this one to the sick pen for individual treatment.

This is a bad situation for so many reasons. First of all, receiving three different loads of pigs makes it difficult to reach of goal of being “all in, all out.” This means all the pigs from the same source come to us at the same time, at the same age, at approximately the same size, with the same disease pressures. Because they basically have the same needs, they’re ready for market at the same time.

The last two weeks have been rough because that third shipment of pigs brought sickness into my barns. I’ve been busy treating pigs individually with a syringe. With some extra care – combined with all the feed they want, plus fresh water, and the ideal temperature and fresh air – these pigs are getting healthy again.

Now there is a perception that raising pig indoors isn’t the best way. Some folks believe pigs should be rooting around outside, but I can tell you from experience that my hog barns have kept these little pigs very comfortable as I treat them. Regardless of how or where a pig is raised, there are always going to be some that get sick and die. It’s just a fact.

Ever since I’ve been raising pigs, I have tried my best to save every one. Sometimes no amount of treatment will ever heal an animal, so farmers must decide how we’re going to handle the situation. Should we let the poor animal suffer until it dies a natural death, or should we take it out of its misery?

It’s very difficult to watch an animal suffer, knowing there’s nothing you can do to help it. That’s why I don’t! When a pig is suffering and has not shown any improvement within 48 hours, I do euthanize that pig in the most “humane” way possible. I believe I must do what’s best for the animals in my care – regardless of others’ perception.