Celebrate Any Holiday with Kourtney’s Cupcakes 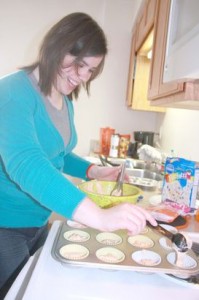 Name a holiday or a special occasion and chances are, Kourtney Determan can bake a cupcake that’s perfectly fitting for the occasion.  She’s been baking people happy since she was 8 years old and completed a 4-H cooking project.  Her mom, Barb Determan, served as club leader for the Early Achievers 4-H club in Sac County, and the tradition continues.  Today Kourtney helps her mom lead the 4-H club, and she’s still crazy about cupcakes.

A senior at Iowa State University majoring in ag communications, Kourtney has literally made friends and raised money with her baking talents.  Her homemade cupcakes and cookies have helped raise money for ISU’s Relay for Life cancer research fundraiser, and co-eds who have helped shovel snow have been rewarded with sweet treats.

“I wanted to thank the fraternity guys who helped shovel snow and ice away from our (sorority) house, so I baked them some of my family’s famous chocolate cookies,” says Kourtney in a recent Farm News article.  “The guys were so thankful, and it’s the first time it clicked with me that homemade food is a big deal.”

Kourtney’s friends have compared her to the top competitors on the Food Network’s “Cupcake Wars.”  Now you can be the judge!  Follow Kourtney’s “Cupcake Galore” board on Pinterest.  Then try your own hand at baking someone happy!

Since Valentine’s Day was just yesterday, I couldn’t help but notice all of the ideas Kourtney has filed on Pinterest: recipes for Sweetheart Cupcakes, tips to making heart-shaped cupcakes, ideas to make heart-filled cupcakes with fresh strawberries, Red Velvet cupcakes, cupcake bouquets, and the list goes on!  I’m looking forward to trying S’more Cupcakes.  You can bet I’ll also try her trick for “edible glitter” at an upcoming Girl Scout meeting.  The hardest part will be deciding which recipe to try first!

Today on TheFieldPosition.com, we’re featuring one of the recipes Kourtney has pinned for Cherry Pie Dark Chocolate Cupcakes.  Bake up a batch of these in honor of President’s Day on Monday, Feb. 18, and George Washington’s birthday on Friday, Feb. 22.

Also feel free to share your own cupcake recipes with us.  You can post them to our Latham Seeds’ Facebook page or e-mail them to me at shannonl@lathamseeds.com.

This recipe appears in the cookbook Bake it in a Cupcake: 50 Treats With a Surprise Inside.