Pig Ties and All Things Pork

This past week was loaded with pork – not the kind that you hear about when Congress is discussed but really everything related to pork production. 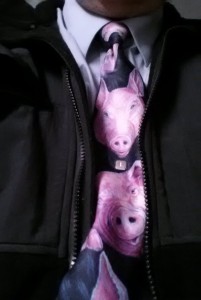 Last week I had planned to spend three days in Des Moines at the Iowa Pork Congress.  Between uncooperative weather and farm chores, I was only able to attend on Thursday.  That morning I did hog chores in sub- zero temps, and it warmed all the way up to zero by the time I was ready to leave home!  I donned my favorite tie, snapped a photo for Facebook and headed out the door.  Turns out, my pig tie was a hit – my phone kept buzzing with comments about it during my entire two-hour drive.

The walk across the parking lot to the convention hall was bitterly cold, and the bone-chilling wind felt like it was coming directly off an iceberg.  I was relieved to get inside the climate-controlled auditorium, which made me think about how I now raise inside a climate-controlled building where their warm and dry with all the feed and water they could want.

A walk through the show site was a stark reminder of just how sophisticated pork production has become.  The amount of equipment and technology on display was amazing!  It’s really mind boggling when you consider everything that goes into building a new site for hog production today.  One day wasn’t enough time to take it all in, so I started looking at exhibits along the outside corridor.  I stopped at the booth for the Coalition to Support Iowa’s Farmers and learned some older hog buildings are being used to raise fish in Iowa.  Since I have an old site that’s not suitable for raising pigs, this tidbit gave me all the more reason to be at this show!

Next I ran into Jeff Hansen and and Jen Sorenson.  Jeff owns Iowa Select Farms and Jen makes people aware of the great things that company does.  Since Jeff grew up on a farm near me, we shared concerns about the lack of moisture and rising feed costs in our area.  Then I stopped to talk with Rodney Dykstra, a recent past president of IPPA.  Because he lives in northwest Iowa, we talked about how farmland prices have topped $20,000 per acre in his area.

Time passed too quickly and before I knew it, I had to make my way to the seminars.  I listened to Laurie Johns with the Iowa Farm Bureau share insights on how pork producers can deal with the media.  Following her presentation, I sought Laurie’s professional opinion on how to handle some of my projects.

Next I attended a seminar about federal policies.  It’s important for farmers to understand how their operations might be impacted.  Former Iowa House of Representatives Agriculture Committee Chair Annette Sweeney provided valuable information and thought-provoking comments during this session.  Annette introduced HF 589, a bill making it illegal to apply for a job in a farming operation under false pretenses is close to becoming law in one of the nation’s largest livestock and commodity production states.  Thanks to Annette’s passion for animal agriculture and her tenacity, this bill was signed into law by Gov. Terry E. Branstad in March 2, 2012.

Honestly, the policy session gave me another wakeup call!  Hearing what folks in the Beltway are considering reaffirmed the importance of advocating for agriculture and the need to bridge the communication gap between farmers and consumers.  We must help them understand how their decisions impact our livelihoods.  #tellyourstory