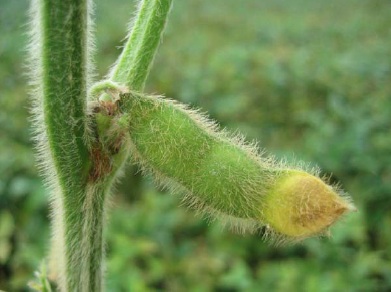 Drought stress during the growing season contributed to the Green Stem Syndrome in Soybeans that’s apparent in certain fields this fall. In some areas, pods and/or seeds were aborted. Plants that abort pods or seeds then redistribute sugars and nutrients, thereby increasing the concentration of photosynthate in the stem and causing it to retain the green color longer.

Harvesting soybeans with green stems can be a challenge. Green stems are difficult to cut and are known to plug up combines, so combine operators must proceed at slow speeds – and with caution. Combine must be properly adjusted, and the cutting knife must be sharp.

Sometimes just certain areas of a field – mostly low-lying areas or areas protected by shelter belts, groves or buildings – may be affected by Green Stem Syndrome. In some cases, local soybean growers went around these areas and will come back to harvest them at a later date.

Depending on the severity of the green stem syndrome, certain soybean fields may need a killing frost before they’re harvested. However, waiting for such a frost may lead to additional yield loss if pods shatter during harvest. Fields should be monitored and harvested according to moisture content.

About 90% of the green stems I’ve seen in my lifetime are caused by some environmental issue. Diseases also can cause it. However, other factors like herbicide injury or nutrient deficiencies are not usually a major factor.