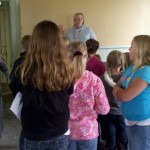 Nearly 60 Girl Scouts from the West Fork Service Unit “got their hands on history” yesterday during Day Camp held in the historic Maysville district.  I was fortunate to be one of the 15 adults, who accompanied the girls as we learned about pioneer living while experiencing a day of outdoor adventures.

In spite of the constant rainfall, we could not have had more fun trekking through the county!  Our first stop by the Old Stone House, which is located south of Hampton on the road to Geneva.  Built in 1854 by Leander Reeve of native limestone, this house was the first permanent structure built in Franklin County. 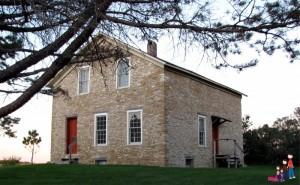 “As all surrounding structures were log cabins, this two-story, seven-room house with a full basement must have seemed quite opulent at the time,” writes Iowa traveler Jody Halsted on her Family Rambling Blog.  “Even today it commands attention:  its thick stone walls stand tall, and its brightly colored door is only beginning of its tale.”

Interestingly enough, Reeve built this “proper” house to lure his wife from Ohio to Iowa.  She only lived in it for three years before deciding she preferred the civilized East.  What intrigues me most is that the Old Stone House was inhabited for 100 years by several different families, yet the floor plan was never altered, electricity was never installed and the two-seat outhouse remained the home’s only toilet. 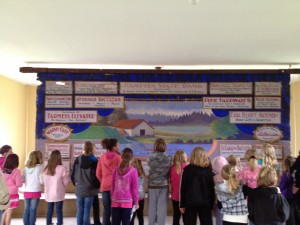 The stage on the top floor of the Maysville Schoolhouse was the scene of many community performances. Local advertisers helped offset production costs.

Our next stop on the tour was the Maysville School House, a beautiful two-story structure used as both a schoolroom and a community center.  Built in 1867, it was the county’s first school.  It continued to be used as a community center and voting center until 2001.  The first floor includes the schoolroom with blackboard and historical voting machines. The second floor includes a stage where both school-sponsored and community presentations were held.

After spending most of the morning on tour, it was time to return to “base camp” at Maynes Grove and prep for lunch.  (SIDE NOTE:  Maynes Grove is one of my favorite places in this whole county.  It’s perfect for receptions, family reunions and meetings of all kinds.  Too bad the weather prevented us from enjoyed the beautiful lake and walking trails, but we kept ourselves plenty busy inside the lodge.)

Who needs KRAFT® when you have a Dutch oven and elbow macaroni?

We divided into small groups and got to work!  Each group was assigned a specific recipe including: 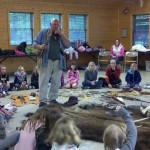 While lunch was cooking, conservationist Dennis Carlson shared his knowledge of prairie animals.  The afternoon was filled with fun and games!  We again divided the girls into groups where they learned to make:

Our mid-afternoon snack consisted of butter the girls had made earlier in the day topped with homemade jam.  We had originally planned to make our own jam, but there wasn’t any sun!  Thankfully, I had a few jams of jar in my pantry for a quick substitution on a cloudy day.  Since I’m still looking forward to trying this sweet treat sometime this summer, I have linked to the recipe here.

Imagine how delicious that jam will take on top of homemade butter, which tastes a lot like whipping cream.  It will be like strawberries and cream!  Doesn’t that just make you want to try it yourself? 🙂 Celebrate June Dairy Month in your own household by making Butter in a Baby Food Jar and Sun-Baked Strawberry Jam!