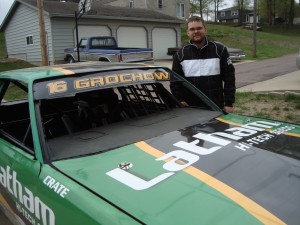 Not only is the wet, cold weather affecting spring planting, it’s also affecting the start of the racing season in southern Minnesota.

“Fairmont and Arlington were both canceled this weekend,” Ryan Grochow posted April 20 on the Facebook page for Ryan Grochow Racing. “So far next weekend looks good… Let’s hope for a good weekend for some racing.”

It’s May 3 and Grochow is still eagerly awaiting the start of the 2012 racing season. The season was supposed to have kicked off Friday, April 13, but cold weather has prevented the wet track from drying. If Mother Nature cooperates, the green flag will wave Saturday night at the Arlington Raceway.

This year will mark Grochow’s fourth season in the Hobby A division, but it’s the first season he’ll be driving a car that he built himself. He used a 1980 Oldsmobile Cutless because he likes the boxy lines of that model.

“You’ve really got to know how to set up your chassis,” explains Grochow. “You also really need to be able to read the track. The dirt track is always changing from heat race to feature race. I was lucky that a local guy who’s been racing for a really long time helped me out.”

In previous years, Grochow raced cars that his dad has built with the help of some of his racing buddies. Ryan’s dad had raced at Arlington for a decade before turning the wheel over to his protégé.

“2009 was the first year I raced, and I’ve been hooked ever since,” says Grochow. “It’s an adrenaline rush like no other! Every weekend you’re fighting for the win.” 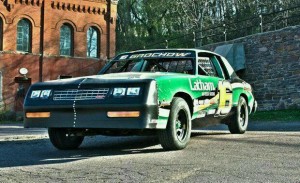 “Points racing” adds a whole new dimension to the race. Growchow races with the IMCA sanctioning body; IMCA pays drivers at the end of the year based on total points. Drivers earn points for their performance on the track, state, regional and national levels.  Total points are tallied at each level of competition and this helps determine regional and national champions. Point totals also affect the amount of free parts drivers can earn from sponsors like Speedway Motors, Stevenville Starts & Electric, Performance Bodies, JR Motorsports, and Sunoco Race Fuel.

In his second year of racing, Grochow placed 5th in points at the Arlington Raceway. He had 12, Top 5 finishes in 2011 and ended the season placing 3rd in total points. If his trend continues, he should place at the top in 2012! But, Grochow isn’t thinking about all that. Right now he’s just looking forward to the start of the season and getting the first race – in a new car – under his belt.