Pull Up a Chair in The Farmer’s Kitchen

When the Iowa Beef Industry Council announced its Top 10 Finalists for the 2012 Best Burger Contest, I decided to take a “burger tour.”  I’m making a point to visit as many of these small town eateries as possible while traveling statewide to visit Latham® dealers and customers. 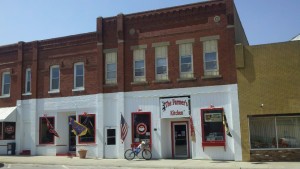 Meat, delivered fresh from Henningsen’s Locker in Atlantic, is key to the quality of these burgers. Ciabatta buns are made special by Rotella’s Bakery. Check it out at The Farmer’s Kitchen!

Recently I had the pleasure of joining a Latham customer for lunch at The Farmer’s Kitchen in Atlantic.  From the time I parked in front of the restaurant, I got a feeling that I was going to enjoy my lunch.  The flags waving on the building front are so welcoming, and there is one for every major collegiate team in the area including Cornhuskers, Cyclones and Hawkeyes.

Since collegiate flags are flying on the outside, it’s fitting that the signature burger is the Cy-Hawk Burger.  It’s more than a five-napkin burger – It’s served with your own roll of paper towels.  I have no idea how many calories are in this burger, but it’s worth every one!  I justified it to myself by saying, “It’s not like I eat like this every day.” 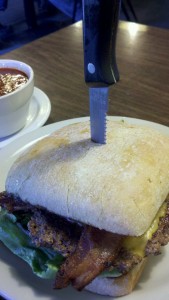 But if I did eat like this daily, I could choose a different burger from the menu.  The Farmer’s Kitchen makes so many intriguing burgers including one with Coca-Cola Barbecue Sauce, which is especially fitting given that Atlantic is the Coca-Cola Capital of Iowa.  The menu also includes tried and true favorites like the Wisconsin Butter Burger and the Bleu’s Burger.

It’s more than worth the drive to Atlantic for a meal at The Farmer’s Kitchen for award-winning chili, award-winning pie and award-winning burgers.  But, don’t just take my word for it.  Read this feature from the March 14, 2012, issue of Gourmet magazine:

In addition to the menu, I love that The Farmer’s Kitchen is a mother-son partnership.  Charlene bakes award-winning pies; Mark makes award-winning chili.  Together they’ve created award-winning burgers.  So, of course, I just had to try one of everything!  The Peanut Butter Explosion is a wonderful mixture of peanut butter, chocolate and cream.  It’s rich, but oh so smooth.  I’d definitely recommend splitting it with someone, but it’s a great finale to a truly wonderful dining experience.

Today Charlene has agreed to share one of her top-selling, award-wining pie recipes with us.