Growing seed has been a family tradition for the Coombs family of Latimer for five generations, spanning 65 years.  Clara Coombs, along with her son Ralph, began raising seed oats for Willard Latham in 1947.  A few years later, Ralph’s son, Harold, began working with him.  And walking in their shadows, from the time he was old enough to toddle, was Harold’s son John.  Today the legacy lives on as John’s son, Andy, joins the operation.

“My grandfather traded work with Willard,” said John Coombs, who’s been farming since 1973.  “They both had a nose for business:  Willard liked wholesale/retail end of the business.  My grandfather liked the details of production and getting a premium for his crop, so the partnership between the two really worked well.  I have lots of good memories.” 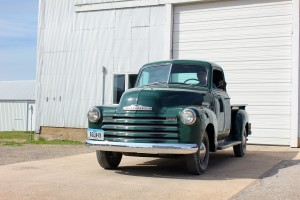 John remembers how the two gentlemen’s relationship ran so deep that Willard even borrowed Ralph’s new 1949 Chevy pickup to Des Moines to pick up seed treatment.  That pickup could pull a wagon holding 100 bushels of oats, which is quite a contrast to the 950 bushels of soybeans they can haul today with their semi.

“We still enjoy driving Grandpa’s Chevy and enter it in a couple of local parades each summer,” says John.  “While we’ve had lots of fun over the years, I appreciate how new technology helps us do our jobs better.  Soybean yields have doubled since I started raising seed.  And new harvesting equipment makes it much easier to combine whole beans in the fall.  Whole beans are key for quality seed; we pay particular attention to avoid splits.”

“We’re fussy in what we do,” adds John.  “We like to get clearance before we go to the field in the spring.  We try to groom the crop through the summer and keep the weeds out.  We realize when we contract with Latham that “quality” is stamped on the bag, so we want to do all that we can to raise the highest quality beans.”

As spring planting gets underway, John and Andy are looking forward to working together.  Andy graduated in 2007 from Iowa State University, where he majored in Ag Studies.  Upon graduation, he went on the wheat harvest with a crew of four ISU students.  They started in Frederick, Okla., on the Texas border, and combined their way through Kansas and Nebraska before heading to North Dakota.  In North Dakota, they would cut wheat by day and canola by night.  Andy says that he got more experience fixing equipment over the course of a few months than he ever would’ve imagined!

Andy, the middle of the Coombs children, is engaged to be married on July 28 to Emily Carr.  John and his wife, Beverly, are also the proud parents of four daughters:

With so many children to feed, John jokes that Beverly has had much practice honing her cooking skills.  The family’s favorite is home-grown sweet corn.  Another favorite is Almond Bars, so today Beverly is sharing her recipe with us.

COOK’S NOTE:  These bars are quick and easy.  You get the almond enjoyment with much less work than the traditional almond bars.