Bacon Steals the Show at #140ConfDM 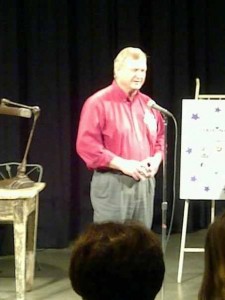 Bacon – yes, bacon – took center stage yesterday at the 140 Conference in Des Moines. It’s interesting how sometimes the most off-handed comment becomes the one thing that “sticks.”  Nonetheless, I’m grateful for the shout-outs and accolades that were given to this pig farmer from Franklin County, Iowa.

I have to admit that I really wasn’t sure how my message would be received by a group of bloggers whom primarily live in urban areas like Des Moines and even Chicago.  It turns out that it was really well received! Many people spoke up in support of me and of farmers in general.  They also reaffirmed people’s desire to reconnect with food and to learn how the food actually gets from the farm to their plate.

This is the reason I was invited to speak.  It’s also why I’ve spoken to more than 70 civic and community groups throughout the state.   I want to help demystify agriculture by starting conversations with consumers, so they can ask questions of a “real Iowa farmer.”

With less than 2% of the population engaged in production agriculture, it seems that fewer consumers have the opportunity to talk with local farmers and get their questions answered.  I guess that’s was also part of CNN’s fascination when they introduced me last winter as “a farmer who blogs.”

It was during our trip to Des Moines last February to serve on a panel discussion from CNN’s “The Starting Point” when Deb Brown asked me to speak at the “local” State of NOW /140 Conference she coordinated in Des Moines.  “A local conference,” I thought.  “Surely, that wouldn’t be problem after appearing live on CNN.”

Little did I realize how just big of an event this would turn out to be!  Unlike the approximately 20 seconds that I had to talk on CNN, I had 10 minutes to talk yesterday at the 140 conference.  I also overhead someone say yesterday that this conference was broadcast live to two million people in more than 20 countries.  WOW.  I’m so glad that I didn’t hear that before I took the stage.  I’m even happier that my wife, Janice, didn’t know how big the audience would be before we got there.

For the past two weeks, Janice kept asking me when I was going to write my speech and start practicing.  I never did actually write one, which is just as well.  There were so many great agvocates that everything I would’ve said would’ve already been said by them any way.  Ag speakers yesterday included:

Other speakers whom I greatly enjoyed were Michael Libbie, who talked about the ROI of social media, and Gigi Belmonico and her Bombshells, who collected Purses for Panama.  (Now they’re collecting reading glasses if you’d like to donate to their cause).  Liz Nead, an inspirational speaker, had an entertaining talk about 30-day trials.  For some reason, I can only remember one of them.  As soon as you watch a video of her presentation, you’ll understand why!  Angela Maiers and other teachers talked about how NOW technology is opening their classroom doors to international experiences.  Denise Bonewitz Passehl talked about her online community helped provide support for a rare type of cancer.

It was also interesting to note that 5 of the speakers on yesterday’s panel were raised in Geneva, Iowa, my hometown.  Considering the town has a population of about 100, it was well represented!  You’ll be able to download each speaker’s presentation in about a week.  I’ll be sure to share that link as soon as it’s available.

Because so many folks yesterday professed their love for bacon, I thought I’d close by sharing a link to the delicious sounding recipe for Bacon-Wrapped Pork Chops.  Think I’ll light the grill tonight!