Learning to Do, Doing to Learn, Earning to Live, Living to Serve.

The FFA motto is comprised of just 12 short words but, when lived out, these words can make a big impact on rural communities.  Just ask Pam Fuller of Paullina, a community of 1,044 in northwest Iowa.

Whether Pam looks for community service opportunities or whether such opportunities find her is a lot like asking, “Which came first, the chicken or the egg?”  But the bottom line is that Pam has a passion for helping others.  She has become a tireless fundraiser for high school organizations and activities in her area.  Her current priorities include fundraising for Close Up, the nation’s premier non-profit, civic education organization, and for the South O’Brien FFA Boosters, a Booster Club for the South O’Brien FFA Chapter.

To help raise money for the Close Up students, who will spend one week of their summer in Washington, D.C., Pam started making lollipops 10 years ago.  She makes 40 different flavors in shapes ranging from snowmen and tulips to hearts and balloons.  Then she sells them at home tracks meets, as well as at home football and basketball games.  If it sounds like she’s spending lots of time in the kitchen, she is!  Pam spends about two to three hours making each batch of 50 lollipops, and last year she made over 6,500 lollipops.  The biggest sellers are cotton candy, strawberry daiquiri and strawberry-watermelon.  (If you’re ever in the area, these lollipops are a real treat!  My kids are a big fan particularly of the strawberry-watermelon ones.) 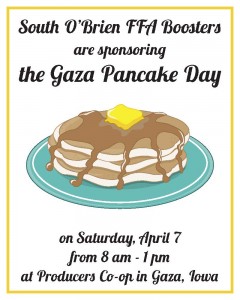 In addition to making lollipops, Pam is currently busy planning a pancake fundraiser.  It’s become a tradition for the Southwest O’Brien FFA Alumni Board to host a free-will breakfast the day before Easter.  The menu includes pancakes, sausage and applesauce.  This is just one of three fundraisers the FFA alumni host to help support FFA members’ trips to state and national convention.  They also host a football tailgate that consists of hamburgers, chips and lemonade.  During the basketball season, they’ve become known for their succulent pork loin supper with a side of baked beans.  Today Pam is sharing their bean recipe on TheFieldPosition.

Pam, who’s a full-time substitute teacher during the school year, doesn’t take off summers from fundraising or working with high school youth.  She and students involved with the Close Up program run a concession stand at the O’Brien County Fair.  In addition to organizing the concession stand, Pam sells ice cream on the fairgrounds. 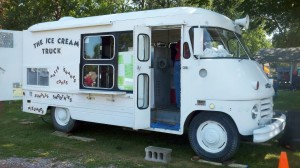 The Ice Cream Truck had become a fixture at the O’Brien County Fairgrounds after 25 years.  So when the proprietors decided to retire, Glenn (Pam’s husband) saw it as an opportunity to keep the tradition alive.  He bought the 1962 Chevy ice cream truck in 2009, and Pam started selling ice cream at the 2009 county fair.  Her product offerings include soft serve chocolate and vanilla cones, sundaes and ice cream sandwiches, homemade chocolate chip cookies, plus Wizzards, which are similar to a Dairy Queen® Blizzard®.  Pam also bought a smoothie maker and a sno-cone maker, and at the 2011 county fair, sno-cone sales topped her ice cream sales.

Year-round Pam serves her community in various ways.  She’s active on church committees and launders and fits the school’s band and chorus uniforms.  Early each morning she delivers the Sioux City Journal – and has done so for 31 years!

Pam and Glenn also enjoy spending time with their six children and nine grandchildren.  This year they’re hosting two exchange students, one from the Czech Republic and one from Venezuela.  It’s no wonder this family knows how to cook for a crowd!  Perhaps their recipe for Big Batch Baked Beans is just what you need when your family gathers soon to celebrate Easter or reunites this summer.  Pair it with Big Batch Brownies and you will easily be able to feed a small army.