He knew he had found “the one” when he was in high school.

Justin Prokosch grew up on a family farm south of Redwood Falls, Minnesota. He helps his dad, Steve, and Steve’s brother, Jim, on the family’s farm, which became a Century Farm in 2005. Steve and Jim went to school for diesel mechanics and operate a machine shop on the farm where they fix other people’s equipment. In addition, Justin’s grandpa in 1972 started a DeKalb® dealership.

“My dad took over the seed dealership, so I grew up around the seed business. I was very involved in high school. I helped sort seed and deliver it to customers. I understood billing and what went into running a seed business. That hands-on experience is what really got interested me in the seed business. I’ve always had a passion for placing seed in the right spot.”

With his background and passion, today Justin is a valued member of Latham Hi-Tech Seeds’ sales team in the north. He serves as Regional Sales Manager (RSM), which includes the Southern half of Minnesota. His responsibilities include building and coaching Latham Seeds’ dealer network.

“Having a large region is challenging because each area of the state is completely different,” says Justin. “One product can work really well in one area but not in the other area, so it all comes back to product placement. It’s important to understand product characteristics.” 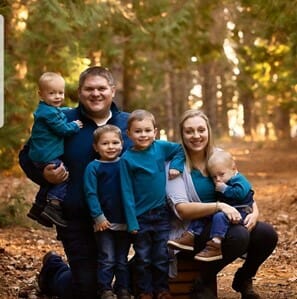 “I really became passionate about agriculture when I was in high school,” adds Justin. “By the time I was a junior, I knew I had that passion for agriculture and that’s what led me to pursue a career in ag.”

After graduating from high school in Wabasso, Justin attended Southwest Minnesota State University (SMSU) in Marshall for Ag Business with a minor in Agronomy. Since Marshall is only 35 miles from the Prokosch home farm, Justin was able to help on the farm while attending college. He planned his class schedule around farm work. When he was a sophomore in college, he purchased the farm place across from his parents’ place and began commuting every day to Marshall.

His heart was in two places.

While he was in high school, Justin met his soul mate while attending a religious retreat. Katie grew up in Marshall, so the young couple spent a lot of time together during Justin’s freshman year of college. The following year Katie attended the College of St. Benedict by St. Cloud where she was a collegiate swimmer. She graduated with a degree in Theology and then pursued a master’s degree in Theology from Boston College. Katie’s program was unique in that she had to spend six weeks of the summer, for three summers, in Boston.

In addition to working on her master’s degree, Katie and Justin were planning a wedding. The couple got married in March 2014.

“When Katy and I got married, we talked about how I am the last Prokosch to carry on the family name. Leo, our oldest son, is named after my grandpa,” explains Justin. “After the twins were born, Katie asked if four boys were enough to carry on the Prokosch name.” 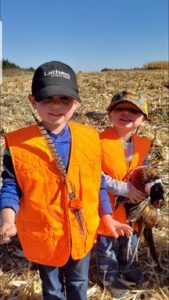 Justin joined the Latham Team in June 2018. Prior to that, he worked as a seed DSM for three years with another company. He also worked at a local co-op and helped run its precision ag program for almost three years after he first graduated from college.

“What really attracted me to Latham Seeds is that it’s a family-owned company. When they say family comes first, the owners really mean it. Katie was pregnant with twins when the company I was working for went through a merge and was reducing the sales force by 30 percent. It was a time of great uncertainty. It was also during this time that I had an interview with Amy (Rohe) and John (Latham). I was impressed that the president of the company – a company owner – cared enough about who was working for him that he sat down with me in the interview. I was coming from Corporate America into a family business, and I thought that was awesome.”

On the Saturday before Justin was supposed to start his new position with Latham Seeds, Katie went into premature labor with their twins.

“I sent a message to people at Latham Seeds, explaining why I couldn’t start on Monday. Everyone’s first response, ‘You need to take care of your family. Don’t worry about us. We will work with you to make sure everything works out just fine.’ That just spoke volumes of how the Management Team and owners care. I’ve really come to understand the value of family ownership. Latham focuses on what matters most.”

Justin also appreciates that he can share his love of agriculture with his children, just as his father did with him. 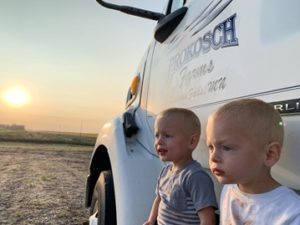 “I love getting our oldest boys in the field and sharing experiences with them. They’re four and five years old now, but they have wanted to be a farmer since they were two. They’re ‘farming’ even when they’re indoors. For as young as they are, they comprehend quite a bit about why we do certain things. I think it’s awesome to see. Through and through, all four of our kids are farm kids.”

Justin and Katie will soon be parents to five kids under the age of six: Leo will turn six in April 2021; Mathias is four years old; and twins Isidore (Izzy) and Augustine (Auggie) are two years old.  Their fifth child is due in March.

More changes are on the horizon. Katie has been working as the Director of Religious Education for two local parishes. Once their fifth child is born, she will stay home full time.

“I’m really excited about the future. There are just so many good things happening in all aspects of my life,” says Justin. “Business has grown to the point where Latham Seeds was able to hire a DSM for southern Minnesota. Dan really understands the type of people we want to do business with. He has strong agronomic background and shares my philosophy about the importance of placing seed, rather than just selling it. Dan also appreciates being back in a family business, and he is ambitious. I’m really excited about working with him.” 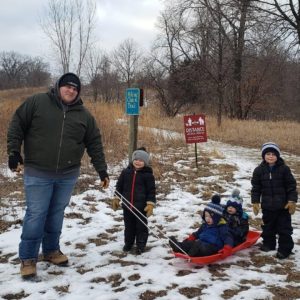 Katie and Justin enjoy hiking in state parks year-round with their children.

When Justin isn’t meeting with farmers or walking fields, you’re still apt to find him outdoors. He and Katie enjoy hiking state parks across Minnesota. Katie grew up camping, so they drive to campgrounds on weekends in the summer to meet her parents. Justin enjoys hunting with his family.

“I love pheasant hunting because it’s something my mom’s side of the family enjoys doing together,” he says. “My mom is the oldest of eight kids, and they’re very close. She grew up on a dairy farm in West Central Minnesota. After my Grandpa passed away in 2004, the dairy barn was turned into hunting lodge and the farm was turned into a game farm. The opening of Minnesota’s pheasant season is a huge family get together. Although it’s in the middle of harvest, I love getting together with everyone.”

This time of year, Justin enjoys ice fishing. He has taken his oldest two boys ice fishing this year, and they enjoyed the experience.

When the Midwest temperatures are cold enough to freeze the ice, it’s nice to sit down at the table with family and enjoy comfort foods. Today Justin and his family are sharing with us a recipe for sauerkraut soup.