15 Success Tips from an Iowa Veteran, Part I

Guest blog post by Darcy Maulsby, author of the rural Iowa history book “Calhoun County,” “A Culinary History of Iowa,” and “Dallas County.” New in 2020: “Iowa Agriculture: A History of Farming, Food and Family” from The History Press and “Iowa’s Lost History on the Titanic.” 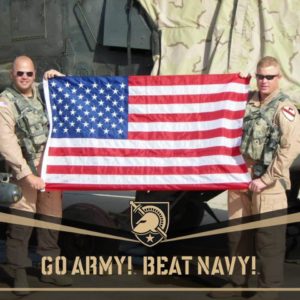 In the early 1990s, there were few things Ethan Dial cared about more high school sports with baseball at the top of the list. This Lake City, Iowa, farm kid felt fortunate to attract some interest from West Point’s baseball coach, so he applied to the United States Military Academy in West Point, New York, a decision that would alter the course of his life.

“I was fortunate to have had a safe 20 years of service,” said Dial, who completed his West Point training in 1999, is retired from full-time military service and lives in Ames with his wife, Dawn, and son, Brendan. “I’ve been lucky to serve alongside absolutely great Americans who are still my friends.”

Veterans Day has been meaningful to Dial and his family for generations. “I was definitely influenced by my Grandpa Gerald Dial’s service as a B-17 tail gunner in World War II and my uncle Lynn Dial’s military service,” said Dial, who also credits both sides of his family with teaching him to honor patriotic holidays like Memorial Day and the 4th of July. 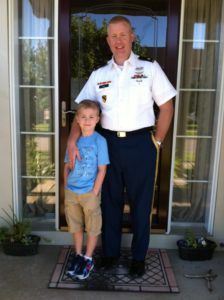 Dial and his son, Brendan.

The patriotism around the Super Bowl and the American flag’s place of honor at other sporting events further solidified Dial’s desire to serve his country. Then there were the hundreds of flags flown at the Lake City Cemetery each Memorial Day. Each flag listed the name of a local veteran, and each name was read during the Memorial Day service. “All this made a big impression on me,” Dial said.

Unlike Memorial Day, which honors the men and women who died while serving in the U.S. military, Veterans Day pays tribute to all American veterans, living or deceased. It especially gives thanks to living veterans who served their country honorably during war or peacetime. That includes Dial, who achieved the rank of lieutenant colonel by the time he retired from the military on October 1, 2019. 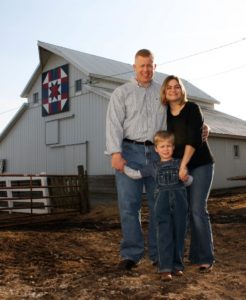 Rural America is home to many veterans. In 2011–2015, nearly one fourth (24.1 percent) of the veteran population 18 years and older lived in areas designated as rural, according to census.gov.

Today, Dial works for Emerson in Marshalltown as the project manager for the CAP1400 nuclear power plant project. “My family and I have enjoyed living in nine locations over my 20 years of military service, but our last four years in Ames with the Iowa State Army ROTC program have been the best four years I’ve served,” said Dial, whose younger brother, Andy, is a fellow West Point graduate currently serving in the U.S. Army.

Click here to read Part II of this story.