Yield is Measured in Barrels and Bushels at Silo City 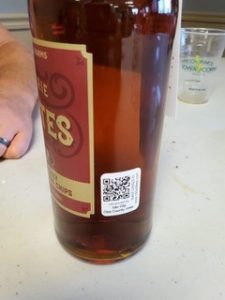 “Rain makes grain” is a common phrase in the country. In Clay County, Iowa, they know corn makes good whiskey.

When Megan Jones heard farmers could deliver bushels of their own corn to Century Farms Distillery and have it turned into whiskey, she thought it would make a unique Christmas present for her husband, Will.

“I connected with Century Farms Distillery and worked out the details. While I was on vacation with Will, one of our friends delivered 50 bushels of Will’s corn to the distillery. As a lawyer, I thought it would be so neat to wrap up the contracts for the corn sold to the distillery. Will was absolutely confused by the contracts at first, but now people are drinking Silo City whiskey! A few select bottles have been put into circulation through promotional events.”

Anyone can have his or her corn turned into whiskey with their farm on it at Century Farms Distillery in Spencer, Iowa. The person who sells the grain gets to choose rapid aged or slow aged, as well as the charring of the barrel. As a result, each farm’s whiskey will taste differently.

Whiskey from an Iowa Century Farm is appropriately labeled. This Northwest Iowa distillery bottles whiskey from “younger farmers” under the Prairie States brand. Each bottle includes a QR code, so you can scan the QR code and read the story of the farm where the corn was grown. Click here to read about the Jones family’s Silo City. 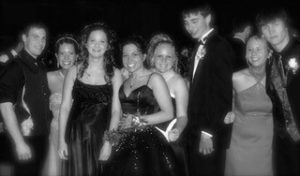 “I was never a farm kid. In fact, the recessional song at our wedding was the “Green Acres” theme song. I said, ‘goodbye city life!’ I am so grateful for my husband’s patience as a I navigate these new waters and for the agricultural community. He is so willing to teach. We will only spread the love of agriculture by sharing it with others, and I am so very proud to be a farm wife.”

Megan and Will were married in 2014. Ironically, they both attended the same prom one year without realizing it until years later.

“Will graduated from Sioux Central, and I graduated from Spencer,” said Megan. “We met for the first time, apparently, at junior prom. Will was asked to go to the Spencer prom by a friend of a friend of a friend. We all posed for a picture together. Will and I happened to be standing next to each other with our respective dates on the opposite side. We had no idea until I was looking through old photos for our wedding slideshow and stumbled across the picture, which was taken by Theone Quattlebaum.”

It took Will’s uncle, Clinton Jones, to get the couple together. Clinton and his buddy, Dave Hessman, belonged to the same Kiwanis Club as Megan.

“Clinton and Dave decided I should invite Will to my post-election celebration,” says Megan, who earned a bachelor’s degree in Law, Politics, and Society from Drake University in Des Moines. She earned her JD degree from William Mitchell College of Law in 2012, and then accepted a position with the Hemphill Law Office in Spencer. She was first elected to the Iowa House of Representatives in 2012, and her term started in 2013.

“I had already sent out invitations and had no extras,” adds Megan. “I took one invitation back from a friend. I put a label over my friend’s name and sent Will that used invitation to my event. I realized he might not get it in time, so I created a Facebook event just so I could make sure he got invited. The day of the event also conflicted with Thursday night football. Will made his choice. I mentioned to Clinton that Will didn’t show up, so Clinton had a conversation with Will. Will message me on Facebook and then we met for lunch.” 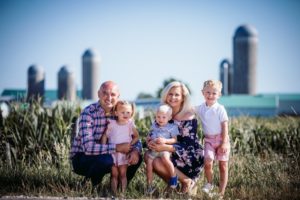 Seven years later, Megan and Will are the proud parents of three very active kids: Anchor, 4; Alma, 2; and Archie, 1. Anchor and Alma are in dance and gymnastics. Anchor is also in swimming. They all enjoy doing cattle chores on Sunday as the Jones family has a cow-calf operation in addition to raising corn and soybeans. 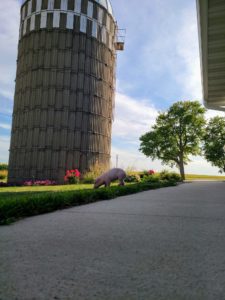 “We recently acquired a pig, and they LOVE helping to care for her,” adds Megan, who says she is enjoying learning more about raising a pig. “During planting and harvest, the kids are often in the ‘buddy seat,’ learning the trade. Anchor loves to farm our carpet with his 1/16 John Deere tractors. He can get planting, spraying and harvest done all in one day!”

When the COVID-19 pandemic shut down schools and businesses and forced people to stay at home from mid-March until June, she felt blessed that her kids stayed busy on the farm.

“We were lucky to have tractors and machinery to watch during the day on the busy farm,” says Megan. “I could send an antsy kid off to catch a ride on the buddy seat. We could always load up and go see the cows. And all of these things are wonderful learning opportunities.”

Megan appreciates being able to give her kids roots. Her parents were in the grocery business, so their family went where the company took them. To the contrary, her husband has lived in Clay County except for when he attended Iowa State University. Will always wanted to be a farmer, and now he’s living his dream in Northwest Iowa. Megan also is living hers.

“When I was in the fourth grade, my teacher had us watch the Presidential Inauguration. I was captivated,” explains Megan. “I came home and told my mom all about it and she suggested I become a lawyer. The rest is history!”

“I am so very grateful to have the opportunity to serve in the Iowa Legislature,” adds Megan, who is serving her fourth term in the Iowa House. “I love this state. I want to make sure our younger generations have the same love and excitement for Iowa as so many generations prior. One of my favorite gigs is getting to recognize constituents for their achievements. I send a lot of certificates recognizing people for their good deeds, birthdays and babies. Dropping those certificates in the mail is a highlight of my week.”

In the spirit of celebrating family birthdays and holidays, Megan is sharing with us potato casserole with a festive twist.

Boil potatoes, cut into chunks (skins on or off) and put into 9x12 pan, set aside. Dice and sautés green pepper and onion in butter. Add two cans of drained mushrooms and put mixture on top of diced potatoes (don’t stir). Melt cheese and add diced Rotel tomatoes. Layer cheese/tomato mixture into the pan. Bake at 350 for 30 minutes.