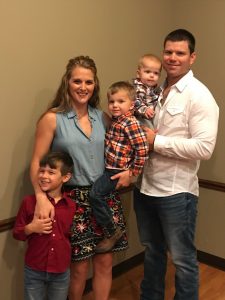 Just as football fanatics travel across the country to cheer on their favorite team to victory, we’re spanning the Upper Midwest to introduce you to some important players on Latham Hi-Tech Seeds’ sales team.

Last week we introduced you to Latham’s Regional Sales Manager (RSM) for Northwest Iowa, Jeremy Joynt, who played tight end at Illinois State University. Jeremy explained how lessons learned through team sports apply to the workplace. The previous week we highlighted Joe Salter, Latham’s RSM in Northern Wisconsin, who shared how skills he gained on the gridiron transfer to our sales team.

Our third in a series of “Friday Night Lights” feature articles will focus on Latham’s RSM for Central Iowa – East. Aaron Steenhoek, a native of Pella, Iowa, feels blessed that he and his wife were able to purchase his grandparents’ acreage a little more than one year ago.

Aaron and Cory want to raise their three sons like they were raised. Cory grew up in Central Iowa near Garwin where her parents and her brother are the fourth and fifth generations, respectively, to farm that land. When Aaron was growing up, his grandpa and his dad raised corn and soybean in rotation. They grew alfalfa to provide forage for the family’s cow-calf operation. Aaron and his siblings also had 4-H feeder cattle projects.

Aaron’s grandfather retired from farming when Aaron was in college. Aaron graduated from Central College in 2011 and began farming with his father in 2012. They raise row crops, as well as alfalfa to feed as forage for their spring-calving, commercial cow-calf herd. Most of their cows are Angus influenced, but Aaron says they’re working toward a purebred Gelbvieh and Balancer herd. They also raise some Piedmontese F1 crosses.

The Steenhoek family enjoys spending time today, caring for the land and their cattle. 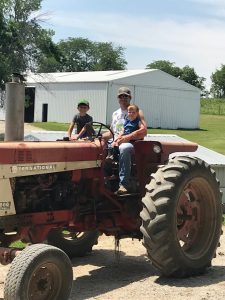 “Our boys are as actively involved in farming as they can be at their young ages. Their little eyes are always watching. If a piece of machinery is moving, they’re in it!” says Aaron. “God willing, our sons will become the seventh generation to operate our family farm. There’s so much history here. We actually have the original abstract from when my great, great, great grandfather bought the farm from the founder of Pella.”

Family comes first for Aaron, and that’s one reason he says he was drawn to working for family-owned Latham Hi-Tech Seeds.

“The Lathams don’t just say family first, they mean it. You can see it through their actions,” says Aaron. “At the end of the day, that’s what this life comes down to… Farming is about providing for your family, teaching them values and virtues along the way, and hopefully leaving them something to continue.”

Creating a legacy is important to Aaron and Cory. The couple met while they were both attending Central College in Pella where they both majored in exercise science health promotion. Cory played basketball and ran track at Central College. She also became a personal trainer while she was still in college, and a few years ago she opened her own studio.

“My kids go with my wife daily to the gym. They enjoy interacting with her clients and working out with them,” says Aaron. “Our oldest son, Emmett, started Pre-K this fall. He loves everything farming. Two-year-old Rhett follows closely in Emmett’s footsteps. If 7-month-old Klay could figure out how to run with his big brothers, he would!”

Every parent knows the days can be long but the years pass quickly. Soon the Steenhoek children will likely play sports where they’ll gain more life-long lessons.

“Playing sports taught me a lot about building relationships and working hard, both of which are necessary to differentiate yourself in a competitive marketplace,” says Aaron. “Being part of a team means working well with others, as well as pulling your own weight. You must elevate your play, so others around you see how you behave and want to elevate their own play. It means helping others, so the entire organization can succeed.”

Aaron also learned to adapt to change. He became a defensive specialist in college, playing the strong side defensive end position.

“This position in college is usually held by people a little larger than I, but I was able to hold my own with the speed and body awareness that I developed. I used to be one of the guys across the line, so I knew how to use their body weight against them.”

Aaron continues, “I played defensive end in high school, but the elevated level of play in college meant I couldn’t continue playing both ways plus special teams. Most days, I couldn’t play my own position on defense for the entire game because I needed a breather. This completely changed the pace of the game for me, and that was probably what I struggled with the most. Everyone around me was so much bigger, faster, and stronger. I had no choice but to match and beat their intensity on the field. College football taught me a lot about what people are capable of when they are willing to put in the effort and work for what they want to achieve.”

When he was majoring in exercise science, Aaron thought he would graduate from college and become a coach. Now he spends his days coaching Latham® dealers on how to meet their farmer-customers’ needs.

“What I enjoy most about selling seed is not actually selling at all. I enjoy working with farmers to help them improve the bottom line. I enjoy learning about their farms and practices. I learn what has worked for them and place products on their acres to help them have the best long-term results! 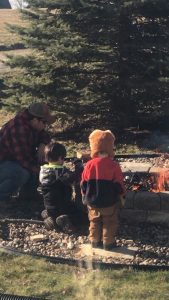 The Steenhoek family spends time together exercising, camping and boating. Aaron also enjoys hunting a few times throughout the year.

In celebration of October as Pumpkin Month, the Steenhoek family is sharing with us their favorite recipe for pumpkin muffins. Pumpkin has an impressive nutrition profile. It’s low in calories and high in antioxidants. Grab a pumpkin muffin or two on your way out the door to get your day off to a good start!

Mix oil, sugar and eggs. In a separate bowl, mix dry ingredients, then add pumpkin. Pour in jelly roll pan and bake 20 to 25 minutes in a 325 degree oven. When cool, frost and enjoy!