March came in like a lion, but the weather has been acting more like a domesticated house cat since spring officially arrived on March 20. To overcome spring fever, active Midwesterners are tossing baseballs and hitting the trails. Paved trails throughout Dickinson County in Northwest Iowa give residents and visitors alike a safe path for walking, running, roller blading and biking.

If weather causes a delay in spring field work, Latham® Dealer Matt Schueneman of Spencer might put a few miles on his bike. He looks for opportunities to get rides in where he can, so he’ll be ready to participate in RAGBRAI XLVII come July 21. This year’s ride will mark the 12th year in which Matt has ridden in The Register’s Annual Great Bike Ride Across Iowa (RAGBRAI). 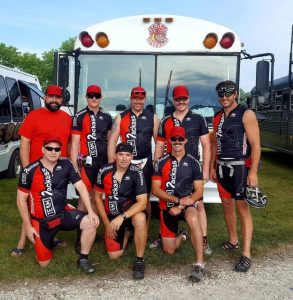 “I really look forward to RAGBRAI because it’s the one time of year that I get to see the friends that I’ve made from all over the country,” says Matt, who has farmed for 24 years in Northwest Iowa. He and his wife, Kari, are raising their family a half-mile from the farm where he was raised. “I really enjoy each RAGBRAI route because it’s a great way to see our state. I enjoy looking at the crops as we’re riding. I like visiting with old guys in small towns and listening to their stories.”

Matt and his team like to ride at the back of the pack, arriving in each of the towns after the crowd has passed. That way they don’t have to worry about congested roadways, and they can enjoy the restaurant food. Anyone who’s ever ridden RAGBRAI or lives in a community that has hosted riders knows that RAGBRAI is as much about the food as it is about the ride. The Farm Boys Hearty Food Company and Mr. Porkchop are two food trucks that travel the route annually and have become riders’ favorites.

“I enjoy trying all the different types of burritos along the route, but the Farm Boys’ breakfast burritos are probably my favorite” says Matt. 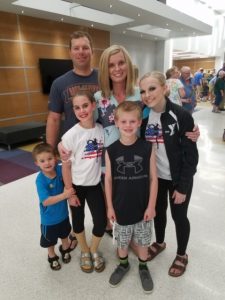 Matt’s oldest son, Drake, occasionally joins him for a few miles on local rides. Drake, 10, loves to be active. He enjoys playing basketball and football. His other interests include hunting and fishing.

His older sister Kayley, 16, also enjoys being on the go. She’s a member of the high school swim team and the Tiger Sharks team at the YMCA. Her favorite stroke is the freestyle. When she’s not swimming, she’s driving. Her parents says she loves driving as evidenced by the amount of gas she goes through in a month’s time.

Eleven-year-old Felicity has been dancing since she was 3. Her favorite dance styles are hip hop and lyrical. She also enjoys participating in both basketball and volleyball. In addition, she really enjoys art and drawing.

The future farmer in the family is likely their three-year-old Abe. He enjoys all things outdoors. He attends preschool every week day. After school, he looks forward to spending time in the shop with Matt or riding in a piece of machinery during planting season or harvest. Abe’s happy place is definitely on the farm. 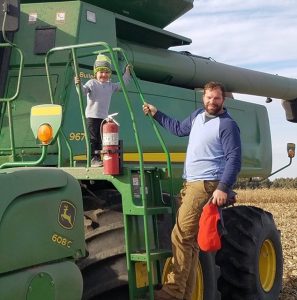 This spring Matt and his little farmer will plant a Latham® SuperStripTM plot for both corn and soybeans. SuperStrip cooperators play a key role in Latham’s on-farm research program as multiple farmers plant the same group of products is planted within a given maturity range including: products currently in the seed guide; products being considered for next year’s lineup; and “experimentals” that are being tested to see if they meet our standards.

After planting a Latham soybean SuperStrip in 2018, Matt will plant 100% of his soybean acres to Latham brand Liberty soybeans.

“Latham 2186 really shined, even though we got twice the normal rainfall. It went 63.5 bushels. That’s the highest-yielding bean we’ve ever had on that farm, which became a Century Farm in 1982,” says Matt.

SuperStrips are a good selling point because they’re real on-farm results from our region, adds Matt. The fact that multiple cooperators are testing the same products allows us to see results across different soil types and under various weather challenges.

Matt is looking forward to getting the 2019 crop in the ground. He’s also looking forward to watching those crops develop throughout the summer months while he also enjoys time family time in the campgrounds. The enjoy time at the campgrounds where they relax by swimming, fishing, grilling and sitting around the campfire with friends. One of their favorite summer side dishes is Snickers Salad, and today’s their sharing that recipe with us on “The Field Position.”

Combine dry pudding mix, milk, and Cool Whip in large bowl, using a hand mixer. Mixture should be a nice creamy texture when combined. Add a bit more milk if needed. Stir in chopped apples and snickers. Refrigerate and serve.