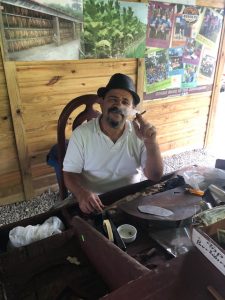 Dominican cigars are among the world’s finest. This experienced craftsman can roll 200 cigars per day. The leaf wrapper on his hand-made smokes is very smooth, tight and a bit oily to the touch. The hand-rolled cigars are filled with high quality tobacco unlike the newspaper and other undesirable scraps that are used to fill cheap cigars. As a result, a hand-rolled cigar burns evenly.

After experiencing bitter wind chills during the Polar Vortex in January and record-setting snowfalls in February, Latham® seed sellers from across the Upper Midwest happily traded their Muck® boots for sandals and flip flops.

Our group enjoyed five sun-filled days along 120 acres of pristine sugar-white sand beaches and lounging around one of 13 luxurious pools at the Hard Rock Punta Cana in the Dominican Republic. Five-star amenities include spa services and an 18-hole championship golf course designed by Jack Nicklaus. The average daily temperature during February in Punta Cana is 84 degrees Fahrenheit, and if that doesn’t rock, I don’t know what does! In my opinion, it’s the perfect temperature for taking adventures.

Mid-week we boarded open-air buses and headed to the Dominican countryside where we learned about sugar cane, tobacco, coffee and cocoa production. We saw pineapples and bananas growing. We learned that Christopher Columbus brought sugar cane to the island, but tobacco is native. Some members of our group enjoyed smoking hand-rolled cigars and tasting Mama Juana, the national drink of the Dominican Republic 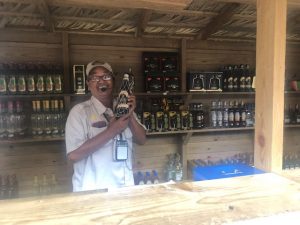 Passion, dedication and hard work are the values that inspired Don Andres Brugal Montaner to found Brugal in 1888. These values have been lived for five generations. Today the maestro roneros, or master rum makers, remain Brugal family members.

Coffee is the official non-alcoholic drink of the Dominican Republic, and Café Santo Domingo has 95% of the market share. We learned that coffee grows on large bushes or small trees, and it takes about nine months for the fruit of the plant to reach maturity. These red, yellow or purple berries contain the coffee beans, which really are seeds that are roasted. Did you know the type of coffee beans and the roasting time determine the amount of caffeine in your coffee? If you don’t want much caffeine, choose Arabica beans in a dark roast. If you want a caffeine jolt, then select a lighter roast. Click here to learn more about coffee production.

Another fun fact we learned is chocolate is purple in its natural state. Most of the chocolate produced in the Dominican Republic is consumed as a beverage and not eaten. Ninety percent of its production is exported, so cocoa is extremely important to this island country’s economy. 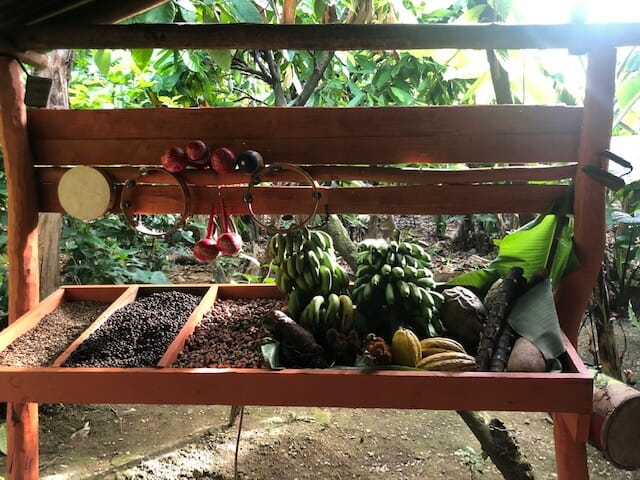 We tasted fresh ground coffee and homemade hot chocolate on an 18-acre farm where they also produce sugar, honey, cinnamon, paprika and vanilla. 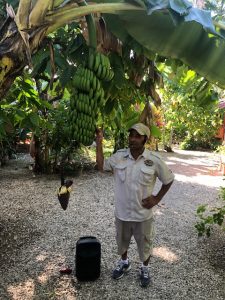 Our guide explains the banana is a perennial plant that replaces itself. Each banana plant produces one crop of fruit. It takes 9 to 12 months from sowing a banana bulb to harvesting the fruit.

Our tour guide told us that chocolate produced in the Dominican Republic is used to make M&M candy. Although I couldn’t confirm that online, I found that M&M candy is a product of war. Forrest Mars Sr., whose father created the Milky Way bar, began manufacturing Mars bars in 1932 for troops in the United Kingdom. When he saw soldiers were given small chocolate beads encased in a hard sugar shell as part of their rations, Forrest got the idea to develop a candy product that would resist melting in high temperatures. This was innovative and business savvy as chocolate sales declined during the summer months from lack of air conditioning. Forrest returned to the United States and approached Bruce Murrie, the son of Hershey executive William Murrie, to join his new business venture. They called their product M&Ms after Mars & Murrie.

Just as Forrest Mars Sr. embarked upon a food adventure while visiting a foreign country, I believe trying native foods is key to experiencing any culture. That’s why today we’re sharing with you a “taste of the island.” Our recipe for Latin-style rice pudding will provide you with comfort food on a cold Midwest winter’s day (or night) while taking your taste buds on spring break!

The menu at Hard Rock Punta Cana’s Isla restaurant, where my husband and I dined on our last evening there, was written in both English and Spanish as Spanish is the Dominican Republic’s native language.

John ordered the rice pudding, and lucky for me, he shared! Our dessert was topped with rum raisins and fresh mangos, then dusted with ground cinnamon. My first thought was “¡Muy delicioso!” followed by “Imagine how delicious this would be with fresh pineapple and toasted coconut!” 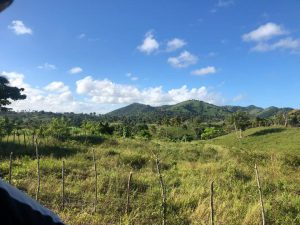 Spanish arroz con leche recipes typically don’t contain raisins or cinnamon but instead use citrus zest or orange blossom water. The dessert we enjoyed in the Dominican Republic featured both rum raisins and fresh mangos. I had no idea what orange blossom water is, but a quick Google® search produced a recipe to make your own. (While I’ve been called a “foodie,” I’m not foodie enough to go through that process. I decided to forgo the orange blossom water and use only fresh orange zest. I love good food that doesn’t require a lot of fuss!)

Below is the recipe I contrived to recreate Arroz con Leche from the Isla restaurant. As you savor each bite, imagine the sun kissing your cheeks, waves crashing onto the beach and palm trees swaying in the warm breeze. Just like the lyrics of the Bob Marley song that are artfully painted above one of the Hard Rock Hotel entrances, “Sun is shining, the weather is sweet.”

Enjoy this sweet treat from the Caribbean and think warm, happy thoughts. “Happy, happy!” as one of our farm tour guides liked to say. 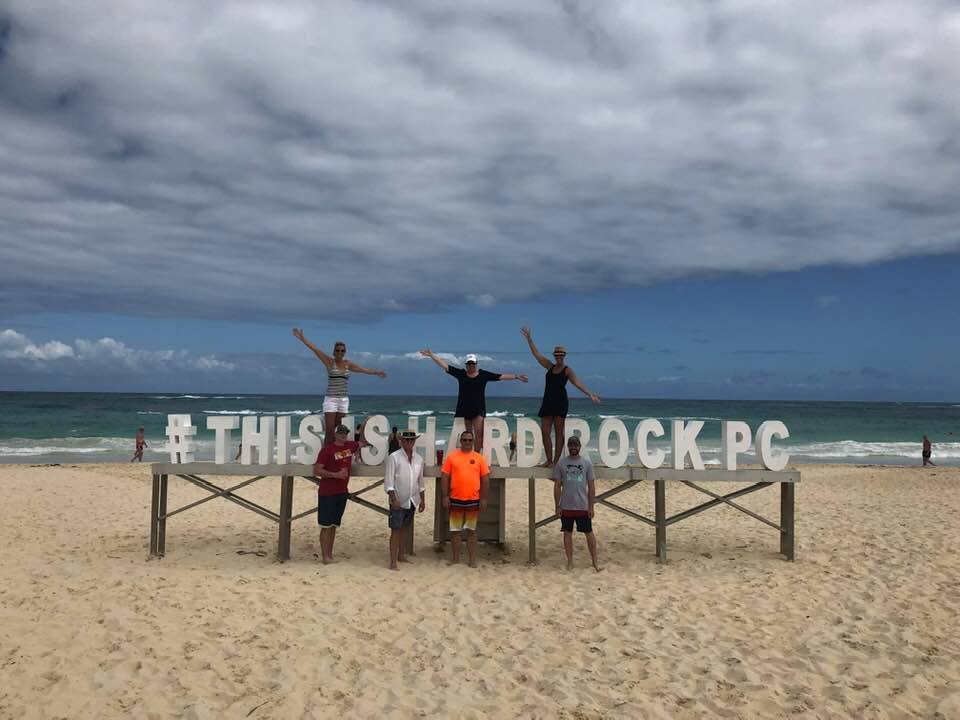 In a small bowl, combine the raisins and rum. Set aside.

In a small bowl, combine 2 tablespoons each of white sugar and brown sugar. Sift this mixture over bowls of pudding.

Then place baking dish under broiler for about 2 to 5 minutes, or until the sugar melts. Watch carefully to prevent sugar from burning.

Rice pudding, or arroz con leche, may be served warm or cold. Garnish to suit your taste. Optional garnishes:

You may want to add additional milk if it gets too thick for your liking. Refrigerate any leftovers.

Tips from the Taste of Home Test Kitchen: