When you know, you know.

Joe McGrath of Clear Lake, Iowa, didn’t grow up on a farm but he spent enough time shadowing his grandfather that he knew he wanted to become a farmer. When Joe met a Washington farmer’s daughter at a wedding in the Inland Northwest, it was practically love at first sight. Natalie moved to Iowa 14 months later, and as they say, the rest is history.

It’s a history that can’t be summed up in one paragraph.

Joe was born in Mason City to Steve and Tricia McGrath. Shortly after Joe was born, Steve joined the U.S. Navy. He was on active duty for eight years during which he was deployed twice during the first Iraq war and served on the USS Forrestal aircraft carrier. While Steve was deployed, his wife and two children would “come home” to the Erickson family farm in North Iowa.

“I enjoyed our visits to the farm,” says Joe, who also spent at least two weeks every summer on his grandparent’s farm. “I was always by my grandpa’s side whether he was working in the field or hauling grain to town. Farming is my passion. I feel so blessed that I get to farm with my wife, my parents and my grandparents.”

It took a few years for the McGraths to make their way home to North Iowa. After Steve fulfilled his military service, he took a position in St. Louis, Missouri, as a jet engine mechanic in the private sector. The McGraths lived there seven years before the opportunity to farm was presented. Between Joe’s freshman and sophomore years of high school, his grandparents asked Tricia and Steve if they’d be interested in becoming part of the family’s farming operation. 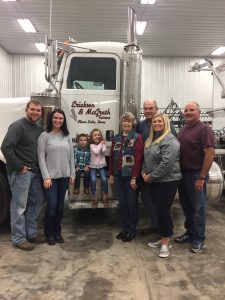 “Farming with my family is something I always wanted to do, so I was happy,” said Joe, who made the move north with his parents and sister in 2002. “I was really lucky to become part of the Clear Lake community. I became good friends with a great group of guys. My graduating class was 96, which was less than half the size of my class in St. Louis.”

After graduating from Clear Lake High School in 2006, Joe enrolled at North Iowa Area Community College (NIACC) where he studied agriculture. Friends Joe made at NIACC were responsible for introducing him to Natalie. In 2012, Joe and Natalie moved into the farmhouse that Joe’s great-great grandfather built on the farm he bought in 1902.

“I absolutely LOVE that I get to raise my kids on a farm because I know how much it taught me growing up a farmer’s daughter,” says Natalie. She and Joe are proud to be raising the sixth generation on this Iowa Century Farm: 5-year-old daughter, Lindy, and a two-year-old son, Nolan. “The life lessons, experiences and values that come with living on a farm are the best things I can instill in my kids.” 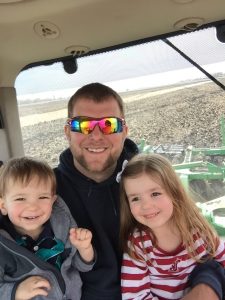 The biggest differences between growing up on a farm in Washington state verses working on the Erickson-McGrath in North Iowa are the weather and the timing of harvest. Natalie says her family harvests wheat and barley in August when it is extremely hot and dry.

“Dad’s grain trucks didn’t have AC. When you parked in the field waiting for a load, you parked with your back to the sun so the cab was in the shade. Then you would open the doors and hope for a breeze!” says Natalie. “There was always a danger of starting field fires, so you would avoid parking in tall stubble to make sure the heat from the engine didn’t cause a spark. The first time I rode in the truck with Joe during Iowa harvest it was a typical crisp fall day. I had my heavy Carhartt jacket on and the heat turned on. Harvest in Iowa is definitely different than Washington harvest!”

With the fall harvest season underway, Natalie brings their children out to the field, so they can ride a few rounds with their daddy. Natalie, Joe’s mom, Tricia McGrath, and Joe’s grandma, Bertha Erickson, take turns preparing dinner for the crew while they’re cutting soybeans. One field meal Natalie is sure to make is Pork Sausage Casserole. 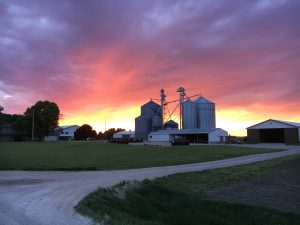 “This recipe came from my Grandma Doris Hein, and Dad said she always served it for harvest lunch in the field. Grandma passed this recipe along to my mom,” recalls Natalie. “Before I was old enough to drive truck for Dad, I would help Mom make harvest lunch. Every day Mom would make a hot lunch, including dessert, for the whole crew and haul it to the field. It’s a tradition I’m proud to continue.”

October Pork Month seems like an especially fitting time to share this family’s recipe on “The Field Position.” Here’s to drier days ahead, so #harvest18 – and harvest meals – can resume!

Mix all ingredients together in the casserole dish. Bake covered for 1 hour at 350*