Always Be Kind is Lesson #1 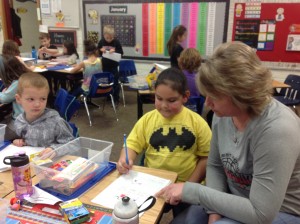 Mrs. Symens holds a writing conference with a sink.

As soon as you step inside Amy Symens’ first grade classroom at West Fork Elementary in Sheffield, Iowa, you can see what lessons are most important.

“Be kind. Be patient. Say please. Say thank you.” Positive messages and images of the Peanuts Gang fill the walls and bulletin boards. Students earn beads daily for positive behavior, such as showing respect and being cooperative, by getting a bead which is then placed on a string.

“Students are very impressionable at this age,” says Mrs. Symens, who is in her 15th year of teaching. “I’m teaching them important skills like math, reading and science. I also feel that it’s important to teach good character. If my kids can come walk into my classroom where they feel safe, comfortable and respected, then they will perform better. They will come in here and want to learn. I want my class to be a bright spot in each kid’s day.”

Character lessons are reinforced with classroom activities. At the beginning of the school year, Mrs. Symens’ reads “Don’t Laugh at Me” by Steve Siskin and Allen Shamblin and Chrysanthemum by Kevin Henkes, which is about a little girl who gets laughed at for having an unusual name. To help show how wounds run deep, Mrs. Symens passes around a construction paper heart. Every time the girl gets her feelings hurt, a student crumples the heart. At the end of the book, she attempts to flatten out the paper heart. Folds and crumbles signify that we still have hurt feelings even after someone says, ‘I’m sorry.’ That’s why it’s important to always be kind.”

“Always be kind” is a lesson that Amy learned from her dad, who farmed near Rockwell. “My dad (Les Deardueff) was the kindest, most patient person. When we were growing up on the farm, he never yelled at us even when we accidentally took out rows of corn while cultivating. Instead, he created teaching moments.”

Teaching moments were plentiful in the Deardeuff household as Amy’s mom, Jo, taught elementary school before she got married. Jo then helped her husband farm. Together they raised five children, yet Mrs. Deardeuff still found time to substitute teach often. 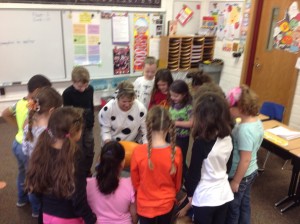 Despite these great teaching role models, Amy didn’t embark on a teaching career immediately upon graduating from Rockwell High School. She earned an associate’s degree as a medical assistant from North Iowa Area Community College (NIACC) and worked at the North Iowa Eye Clinic before making the move to the Principal Financial Group where she worked her way to assistant manager. Principal is on the Forbe’s list of the world’s best list of employers, yet Amy felt a calling to become a teacher. She continued to work full time during the days for four years while taking evening classes to earn her teaching certificate.

Once Amy completed student teaching, she stayed home with her three sons for seven years and also was an in-home daycare provider. She also coached volleyball at John Adams Middle School and basketball at Roosevelt Middle School during this time.

“When my youngest son started kindergarten, I accepted a job in Sheffield where I was a para for a year to be closer to home. Then a teaching job opened in Sheffield Elementary, so I applied for it and got it. I coached high school volleyball in Rockwell until my boys got old enough to be involved in their own sports. I didn’t want to miss their events, so I gave up coaching.”

She may have given up coaching, but Amy continued to make a difference in youth sports. After trying to juggle a full-time teaching job with getting her three sons to their various activities like Youth Sports Foundation (YSF) football in Mason City, Amy researched what it would take to get YSF started in Rockwell. She spent one summer completing all the necessary paperwork and raising funds for the equipment.

Involvement in sports has certainly influenced Amy’s sons. Her oldest son, Spencer Halloran, was a four-year, four-sport letter winner. Spencer is a senior at Houston Baptist University where he plays baseball and is majoring in business. Reese also was four-year, four-sport letter winner and was named 1st Team All District Football. Reese graduated from West Fork High in 2016 and attends NIACC. Mitchell, a junior at West Fork High School, is following in his brothers’ footsteps as a four-sport athlete. He was named 2nd Team All District Outside Linebacker in 2017 and currently is averaging 12 points as a starting shooting guard on the Warhawks basketball team. 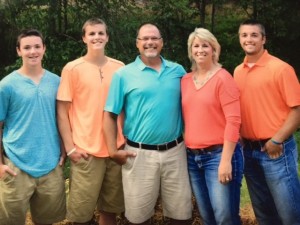 In between attending her sons’ activities, you’ll find Amy preparing lessons for the classrooms. I had the opportunity to catch up with her recently in the classroom and visited with her about how she incorporates ag in the classroom. Amy often shares stories from her experiences growing up on the farm. She’s looking for a way to share incorporate experiences that she and her husband, Mark Symens, have on their farm.

“We have 15 heifers and cows that will calf between February and April. It would be cool to use technology to show my class these calves,” says Amy.

In the past, Amy made a time-lapse video that showed chicks hatching her in second grade classroom as part of North Iowa Ag in the Classroom. First grade Ag in the Classroom activities teach lessons about how farmers take care of their crops and livestock. Because everything comes from a seed, students sort different types of seeds with the objective of teaching them to identify field corn and soybeans.

Other Ag in the Classroom teach students important lessons about soil health. Students also learn that earthworms can indicate good soil health. You also can teach these lessons at home with Dirt Cake, which is a recipe that Mrs. Symens says is a hit with kids.