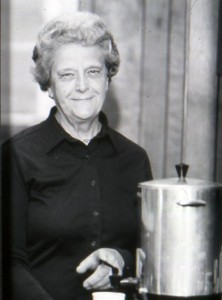 In honor of National Popcorn Day we are featuring Evelyn Latham. Evelyn was very involved with the seed business when the company began and was very well-known for her hospitality, one of her most popular recipes was her popcorn balls.

To introduce Evelyn I’ve decided to begin with an excerpt from memories that she penned years ago for her family.  “My story is one of love and hard work, interspersed with joys, tragedies, achievements, and a lot of family pride.  I was born on December 17, 1916, to John A. and Nora Ladegaard Johansen at our farm home near Latimer, Iowa.”

“In 1947 Willard bought a large seed cleaner,” Evelyn writes in her memoir.  “He built a trailer to transport it, and that was the beginning of our seed business.  He made a home-made seed treated, and he and John Hill went from farm to farm to clean oats that were full of weeds and infected with smut fungus disease.  They almost froze to death, so the next year Willard had farmers bring their oats to a shed on our farm where they could be cleaned and treated.

We soon outgrew that, so Willard remodeled our corn crib (granary).  I’ll never forget how hard he worked putting in an elevator and machinery!  He had a man helping him.  When they started the equipment, they discovered the elevator wasn’t high enough.  He was just sick about it.  He came into the house and said, “Eve, come, we have to go for a ride”.  So we went for a little ride.  Then, of course, he had to rebuild it.”

Evelyn helped support Willard and their business in numerous ways.  The family’s kitchen table served as the company’s office, so she made numerous trips daily from the house to the outbuildings whenever Willard was needed to a phone call.  Known for her cooking skills and hospitality, it wasn’t unusual for Evelyn to feed a room full of hired men and customers.

In addition to serving as secretary and caterer in 1947, Evelyn was busy caring for four boys ranging in age from 6 to 1.  (The Latham’s fifth son was born in July 1948.)

It’s no wonder Wallaces Farmer magazine recognized Evelyn as Iowa Master Farm Homemaker of the Year!  An excerpt from the December 15, 1962, issue of Wallaces Farmer states, “Mrs. Willard Latham, Franklin County, shares her interest in music with her husband and sons…  she loves music and likes to read when she has time.”

No matter how busy and full her life might have been, Evelyn was known for making time to share coffee and fellowship with family and friends.  She was one of those rare people who put you at ease from the first meeting.  When John first introduced me to her, Evelyn pulled me into a hug.  Her smile reached her eyes as she told me how glad she was to meet me.  In the next breath, she said, “Let’s go into the kitchen for some coffee and cookies.  You’ll have some, won’t you?  Sure you will.”Anyone who ever met Evelyn knows there is no choice but to make time for coffee and cookies.

In honor of National Popcorn Day we are sharing her recipe for popcorn balls. These are a big hit around the Christmas Holiday. We hope you’ll enjoy this family recipe as much as we do!