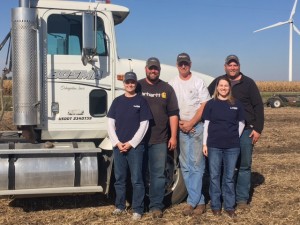 From left to right: Amy, Thad, Steve, Rachelle and Noah Bosma work together to bring in the crop near Lake Park in Northwest Iowa. Like their father and grandfather before them, Thad and Noah operate a seed dealership.

LaDonna Bosma raised her three sons in the same house where she and her brother were raised in Ocheyedan, just about 30 minutes west of Iowa’s famed Lake Okoboji. LaDonna’s dad, Erwin Schubert, was a seed dealer for more than 30 years. LaDonna’s husband, Steve, helped with the seed business and took it over upon her dad’s retirement.

Like many farm kids, the Bosma brothers grew up helping on the farm and with the seed business. At the time, no one realized a legacy was being created.

“My boys are the third generation to operate a seed dealership,” says LaDonna proudly. She’s also quick to credit her sons for choosing such wonderful women as their wives.

Amy grew up on a dairy farm in Parkston, South Dakota. Noah’s wife, Rachelle, grew up on a grain and livestock farm in nearby Dimock. The two have been best friends from grade school and graduated from the same high school.

“I couldn’t have picked a better sister-in-law,” says Amy with a smile. “Now our kids are growing up together just like we did and that’s so awesome.”

“We try to be as involved on the farm as we can,” says Rachelle, who has worked for the past 18 years as a certified medical assistant for Sanford Medical Center. “I love that our kids are making memories on the farm. They’re making memories by riding in the combine with Grandpa, in the semi with Daddy or in the tractor with Uncle Thad. And when they’re not in the field, they’re still farming. I moved Jase’s (play) combine to vacuum the carpet and he noticed it wasn’t in the same spot. He’s only three, but he pays attentions to those details.”

Amy adds that she’s glad their kids can watch crops go full circle from planting the seed through harvest. It gives them an appreciation that others don’t get. There’s a sense of accomplishment that comes from nurturing crops and livestock as most farmers will tell you.

“I really like the variety that comes from farming,” says Noah, who began raising hogs in 2007 and grain in 2009. “Diversity helps with the cash flow, plus pigs produce nutrients that our crops need to grow. I love seeing the results. I like watching the pigs and the crops grow.”

Like his younger brother, Thad says he always wanted to farm. Four years ago, he had the opportunity to buy a farm with hog buildings just five miles from Noah and Rachelle. Both of their farms are within five miles of their home place.

To lower their own input costs as well as to further diversify their farming incomes, Thad and Noah started to explore options for a seed dealership. A variety of timely events led them to Latham Hi-Tech Seeds. One of Thad’s friends posted on Facebook that he had become a Latham® dealer. Then a Latham seed representative made a cold call to their farm. Soon thereafter, Thad contacted Darin Chapman, Latham’s regional sales manager in Spencer. Thad and Noah met with Darin and signed as dealers.

“We really liked that Latham is family-owned and family-orientated,” says Thad. “When we attended our first Latham Dealer Kickoff meeting, we were impressed that John Latham himself sat down at our table for lunch. Then John delivered the product training, and we were like, ‘This is the real deal’! We can talk directly to the owners of this company.”

The Bosma family clearly values working together as a family. While the brothers own and manage their own pork operations, they farm together. They work on equipment together, and they work in the same field together to bring in the crop. Their dad enjoys operating the combine, and their mom enjoys driving the grain cart during harvest.

“When you’re working in the field and responsible for making meals, you get creative,” says LaDonna. “I’m always looking for a quick fix that tastes delicious.”

Amy and Rachelle take turns bringing the evening meal to the field, which allows them to have supper as a family. When I was visiting, Amy had fixed Ham Sliders and agreed to share her recipe on TheFieldPosition.com. 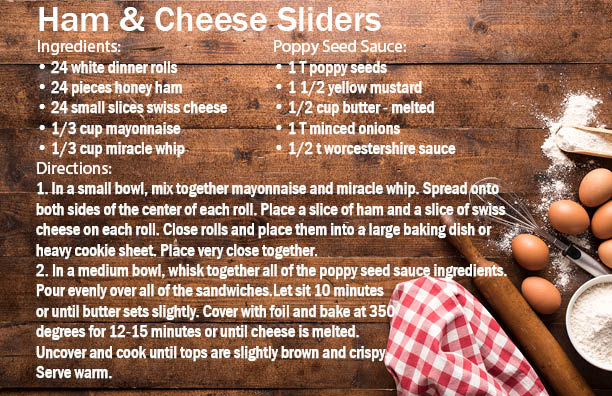 One of the family’s favorite field lunches is submarine sandwiches piled high with sliced pork loin, deli turkey, sliced tomato, lettuce, slices of both Provolone and Co-Jack cheese with a spread of mayonnaise and mustard. Bacon Cheeseburger flat brats from the Forbes Locker are always a hit, too.

Another family favorite is Swedish Meatball Sandwiches. Note LaDonna’s tips to make this recipe quick and easy with minimal cleanup!