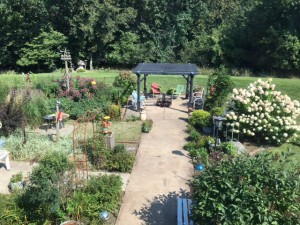 Steve and Jodi Roelofs live in a garden spot of Minnesota.

Jodi’s passion for gardening and re-purposing vintage furniture and equipment is evident from the moment one pulls into their yard. Pots and gardens filled with lush, color flowers look inviting. Her vegetable garden is a work of art. The backyard looks like something from a Country Living or Better Homes & Gardens photo shoot. It’s the type of setting that makes a book worm like me want to curl up with a novel, sip on a glass of cold lemonade and read while the water feature provides a calming effect.

The couple raised their family in the farmhouse next door, where Steve grew up and still raises hogs. That house serves as Steve’s farm office and Jodi’s workshop. The former kitchen and living room are filled projects in various stages of re-purposing. Chalk-painted chairs will be sold at Hilltop Florist and Greenhouse in Mankato, where Jodi has worked for more than 20 years. She retired from managing the greenhouses and special planting projects.

Jodi studied graphic arts at South Central College in Mankato where she met Steve, who studied ag production. She says she began working part-time at flower shops when her kids were small because it allowed her to enjoy adult conversation and provided her with a creative outlet. The scale of Jodi’s gardens has grown as her children grew.

The Roelofs are the proud parents of four sons: 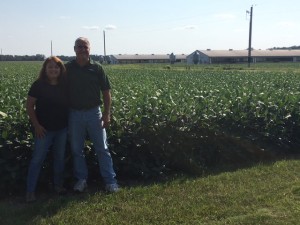 Jody also served as a 4-H leader from the time their oldest son was 10 years old until their youngest son graduated in May 2017. During her tenure as a 4-H leader, she shared her passion with New Horizon 4-H Club members. They won an award from the Minnesota Department of Natural Resources for the bird feeding station they built on the Blue Earth County Fairgrounds in Garden City, Minnesota.

“We had so much fun at the fair with our kids,” said Jody, who grew up on a Minnesota dairy farm and belonged to 4-H.

Steve and Jody say they particularly enjoyed staying at the state fair with their kids, who showed pigs. Adults stayed in camper, while the kids slept in tents or in the hog barn.

“Last year it started to rain, so we had 11 of us in a 27-foot camper,” Steve says with a laugh. “We had to make room for everyone. We had people sleeping everywhere!”

While that night of sleep might not have been best, it made for great memories. Another highlight of the annual affair is playing State Fair Bingo. Cards are available online, and the Roelofs says they’ve had hours of enjoyment. Kids would take photos of items on the Bingo card like a triple stroller, a guy with an eye patch and a woman wearing a country music t-shirt.

Instead of attending the 2017 Minnesota State Fair, Steve and Jodi moved their youngest son to South Dakota State University. These empty nesters are embracing this new chapter of life. They’ve learned to adjust and adapt through the years.

When Steve and Jodi’s oldest son went to college, the family stopped farrowing. Jodi had been working in the farrowing barns, so this change gave her the opportunity to return to working in a floral shop. Steve and his brother, who had been farming together in a family corporation, decided to split the operation. Steve raised feeders and his brother raised the finishers.

A market crash prompted Steve to reevaluate the pork operation. For the past seven years, he has leased his pig barns. Steve and his middle son do the daily hog chores.

“This arrangement works well for us,” says Steve. “We’re responsible for the day-to-day care of the feeder pigs but we don’t have to assume any of the risk. Each month we know exactly what we’ll make.” 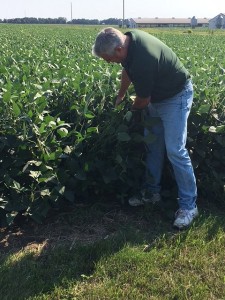 Raising pigs, as well as selling Latham® brand seed, complement the family’s grain operation. Both enterprises allowed the Roelofs to cut expenses while increasing income to allow their son an opportunity to farm.

“We went to FarmFest and spoke with a few different seed companies about dealerships,” says Steve. “We really liked the idea of working with a family-owned seed company. When we realized one of our neighbors was a regional sales manager for Latham, that helped us make the decision.”

Steve and Jodi look forward to fall harvest. In addition to bringing in the corn and soybeans, Jodi will be harvesting fall produce. She sells pumpkins, squash, gourds, broom corn and other items through Hilltop Florists.

Once the fall field work is done and the season changes, the couple looks forward to snowmobiling. They enjoy outdoor activities all year long from driving around and looking at crops to spending time at their cabin where they enjoy pontooning, water skiing and jet skiing with their kids.

The Roelofs family also enjoys family dinners. In celebration of National Pork Month in October, today they’re sharing with us one of their favorite recipes for Chinese Pork Chops. 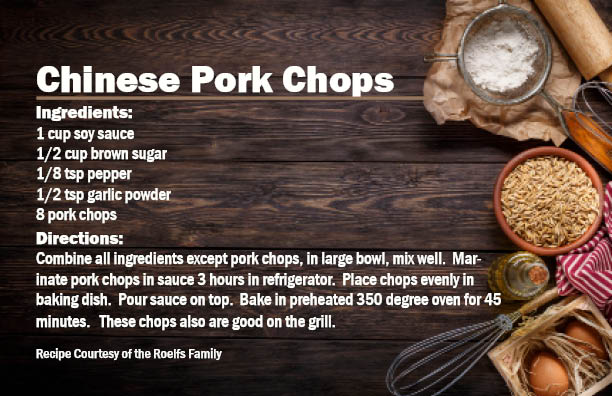 Dip each pork chop in salad dressing, than roll in corn flakes. Place in baking in pan and bake at 375 degrees for 45 minutes.