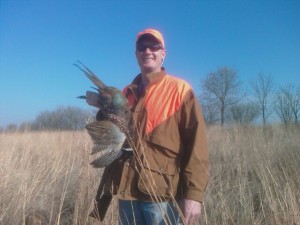 After growing up together on a farm near Good Thunder, Minnesota, twins Aaron and Adam Knewtson went their separate ways upon graduating from high school. Aaron enrolled in Ag Business at Iowa State University in Ames, Iowa. Adam headed west to Southern Illinois University in Carbondale, Illinois, where he pursued his dream of becoming a pilot.

Fast forward 23 years and the brothers are engaged in ag business near their hometown. Aaron works for Compeer Financial, and Adam works with their father in the family’s seed business.

“When I left home, I never thought I’d return and work for our family’s seed business. I dreamed of being a pilot and flying amazing aircrafts, but instead I found myself working 12-hour shifts. When I wasn’t at work, I was dealing with big city traffic. I really longed for open spaces where I could fish and hunt,” explains Adam.

Moving home to South Central Minnesota held more appeal as time went on. He worked at the airport in Minneapolis. After college, he also worked at an agricultural cooperative. He earned less at the co-op but realized he enjoyed working in agriculture. He decided that if he was going to work in agriculture, he might as well go home to the family business.

Many hats are worn by this father-son team. Wayne farms, as well as oversees the production of soybeans. Adam handles the operations side of the business by working with contract growers to produce food-grade soybeans and managing the export logistics. Adam also owns Advantage Seed, Inc., a retail soybean seed production company.

Knewtson Soy Products and Advantage Seed are both located on the farm where Adam’s grandparents made their home for 63 years. His grandfather, Ellsworth Knewtson, didn’t start the family seed business, but he greatly influenced his son’s and grandson’s business aspirations.

Ellsworth grew soybeans marketed under Minnesota Public Seed and has the distinct honor of being the first farmer in Blue Earth County to grow soybeans.  In 1966, he won the Blue Earth County Fair Grand Prize for producing a soybean plant with 405 pods!

To put this feat into perspective, soybean plants averaged about 160 pods per plant when Missouri farmer Kip Cullers raised 139-bushel soybeans in 2006 and 156 bushels in 2007. Culler’s soybeans produce quadruple the number of pods on an “average” soybean plant.

Like an avid golfer shooting for the illustrious hole in one or the fisherman going after a trophy walleye, those involved in the seed industry keep working toward record-setting goals.

“The seed industry can be competitive, yet we’re all still friends,” says Adam. “I really like the comradery that exists among seed company owners and managers, but what I enjoy most about my job is working with farmers. I really like the farmers who produce for us and work with us.”

When Adam can get away from the seed business, he prefers to get away from it all. He’s part of an outdoor club that has gone turkey hunting in Missouri, fishing in the Chesapeake Bay, crabbing in Georgia, and duck hunting in Arkansas. He also purchased a Conservation Reserve Enhancement Program (CREP) farm where he’s made many memories hunting with friends and sharing his love of “gaming” with the younger generation.

Adam enjoys gardening, as well. He likes to experiment in the kitchen or on the grill to turn fresh produce and meat into delicious homecooked meals.  Today he’s sharing one of his favorite recipes with us on TheFieldPosition.com.

1 lb of tomatoes (fresh and ripe)

2 zucchini (peeled and chopped in dices)

2 soft peppers (red are the best), chopped in thin slices

In a deep frying pan, at medium  heat, drop olive oil to cover bottom of pan.

Sauté the onions for 5 minutes, then push aside to edge of pan.

Stir together all the ingredients; add the chopped tomatoes.

If there is too much juice from the tomatoes, remove and keep in a jar for topping breakfast eggs.

After the 20 minutes is up, float walleye filets on top of ratatouille. (Trout works, too.)

Cook fillets for no longer than 5 minutes.  Do not flip; they will cook through.

Set entire pan on the table and let your guests dig in.

This recipe is from the wife of one my college professors, Dr. David Clarke. His wife, Anne, grew up in the south of France. Her father was a French Naval cook, and he taught Anne how to cook. Their motto for cooking is “Fresh food, freshly prepared.”