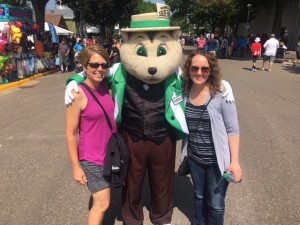 One of my best friends, Kristina, who has lived in the Minneapolis area for more than 10 years with her family, agreed to join me for this adventure. Both former Iowa 4-H members, we visited the 4-H exhibits building. The displays were so visually appealing!

The Iowa State Fair has an amazing 4-H exhibits building, too. It’s always an honor for 4-H’ers to have their projects selected for state. This is one of the many similarities I noticed between the two fairs.  Each of these state fairs has “agriculture interaction” for children: Iowa State Fair is home to Little Hands on the Farm; Minnesota is home to Little Farm Hands. You’ll also find a corn dog stand practically on every street corner. Both fairs also have a giant slide, a sky glider, and a predominant grand stand plus several small stages throughout the grounds.

Iowa’s commodity groups showcase the best products and introduce new menu items each year, like last year’s winning Nacho Mama’s Tacos and this year’s Thanksgiving Balls. The Minnesota State Fair fare had more of an international flair, at least from what I saw and experienced yesterday.

Kris and I literally ate our way around the fairgrounds, starting with Walleye on a Stick and Walleye Balls, which were a new fair food in 2016. (I’d give 5 stars to the Walleye on a Stick, which is lightly seasoned with lemon pepper. Everyone should try this IMO. Seriously, what could be a more authentic food in the Land of 10,000 Lakes than Fish on a Stick? After all, Baudette  in the Lake of the Woods is the Walleye Capital of the World.)

Next, we had by Key Lime Pie on a Stick made by Kermit’s Key Lime Shoppe in Key West, Florida. I honestly don’t know how Key Lime relates to Minnesota, but that pie on a stick was delish! I’ve visited Kermit’s in Key West, and one bite into that refreshing dessert took me on a walk down memory lane.

I also had fun reminiscing about past vacations while walking around the International Bazaar, which showcases merchandise and foods from around the world. There were so many options, but I decided to stick with the “food on a stick” theme and ordered a Gyro on a Stick. 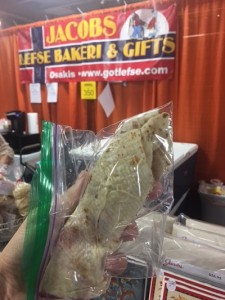 MN State Fair is known for lefse. We sampled the Lingonberry Lefse. YUM!

“Gyro on a stick” was a little misleading. I envisioned it be more like a kabob or the Iowa State Fair’s “salad on a stick” where there would be an alternating pattern of Greek-seasoned meat, grape tomatoes and a few lettuce leaves. Instead the Gyro on a Stick is more akin to Iowa’s Famous Pork Chop on a Stick because it’s a solid chunk of meat. (Side note: Pork Chop on a Stick is so famous that presidential candidates Hillary Clinton and Donald Trump were both photographed eating one at the 2015 Iowa State Fair.)

Pork Chop on a Stick is one of my all-time favorite Iowa State Fair Foods. It ranks at the top of my “must eat list” along with the Hot Beef Sundae from the Cattlemen’s Beef Quarters and lamb gyros outside the sheep building.

In my opinion, just because you can put food on a stick, doesn’t mean you should! My trip to the Minnesota State Fair confirmed (for me) that gyros belong in a pita topped with Tzatziki sauce. (That sauce is magical!)

If you’re an Iowan, you might prefer Pork Gyros. (Did you know there are more pigs than people in Iowa? There are six times more pigs than people in the Hawkeye state!) If you’re a native Minnesotan like food blogger Jeni Eats,  you’ll consider Demtri’s Gyros a classic fair food. If you grew up raising and showing sheep like I did, you know the best gyros are made with American lamb. Taste for yourself! Enjoy fair fare all year long with this recipe for Lamb Gyros.