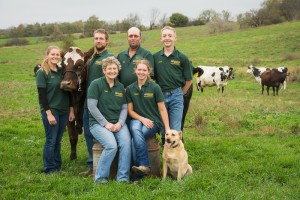 Ruth grew up on a dairy farm and fell in love with a self-described “city boy,” who went to the same country church in Franksville, Wisconsin.  Dan grew up in town, but he worked on dairy farms throughout high school and always dreamed of becoming a dairyman.

Dan pursued his dream by attending the University of Wisconsin-Platteville where he says he fell in love with the hills of southwestern Wisconsin. After graduating with a bachelor’s degree in Animal Science in 1983, Dan was hired as an AI technician for Tri-State Breeders. One of the perks of his job was seeing lots of dairy farms and getting ideas for his own operation.

In March 1985, Dan and Ruth were married. They both worked and saved with the shared goal of buying a dairy farm.

“In 1990, we got started part-time and were looking for an opportunity to buy our own farm,” says Dan. “Farm Credit Services produced real estate brochures featuring farms that had been foreclosed during the Farm Crisis. We looked at this farm and could see it’s potential.” 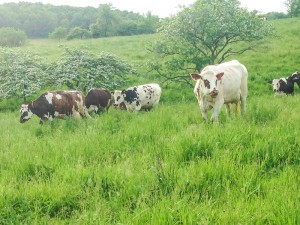 Dan and Ruth have become known as grazing advocates. Dan has written extensively for Graze magazine, spoken at grazing conferences and the couple has hosted numerous pasture walks. In 1995, the Vosbergs and a few other grass-based dairy farmers helped start the Wisconsin School for Beginning Dairy and Livestock Farmers program through the UW – Madison Farm and Industry Short Course.

The farmstead and the land were in rough shape, so the family worked to make continual improvements. By 1997, their herd size had grown to 100 cows. The 52-stanchion barn was retrofitted into a swing-16 milking parlor. They were the first dairy farm in Wisconsin to put in a Dairymaster parlor from Ireland. At the time, a UW-Madison college student from Ohio was interning at Valley View. He said his family had a Dairymaster and it worked really well. 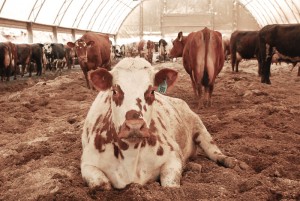 Multiple hoop barns with compost bedding packs were added over the years to offer protection from the hot summer sun and harsh winter winds. They had planned more improvements, but that was before a tornado touched down in May 2017 and damaged four buildings.

“Our short-term plan is to repair everything that’s broken and then move forward with our plans to increase efficiencies throughout the operation,” says Derek.

While they worked to restore the land and upgrade their facilities, the Vosberg family also worked to improve their herd. They started with Holstein and Jerseys but experimented with crossbreeding to find the best  grazing cross for their system . In 2000, they bought their first Normande semen.

While this dual-purpose French breed is relatively new to America, Dan describes it as the quintessential cow. Breed qualities include hardiness, fertility, easy calving, with good feed conversions and genetic diversity. The breed fits well with the Vosberg’s operation.

Oldest son Derek describes Valley View Farm as “a 220-cow crossbred Normande herd based in Southwest Wisconsin. We rotational graze and calve bi-seasonally. Half of the herd calves in spring and half in fall.” 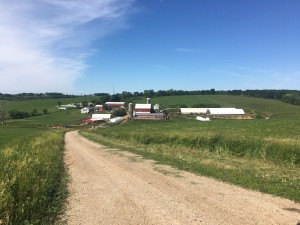 As soon as one pulls into their lane, you can see how Valley View Farm got its name. It’s a long way down!

While the Normande cows don’t produce the quantity of Holsteins, they produce high protein and butter fat that’s desired for cheesemaking. The Vosbergs sell their milk to Torkelson Cheese in Lena, Illinois. Because carcass yield and marbling are superior, they also fetch top dollar for their cull cows and bull calves.

Ironically, Derek’s wife grew up on the largest U.S. Normande beef farm. He and Sarah met at a national Normande conference and were married August 20, 2016, on their farm. While Sarah works off-farm as a physical therapist assistant, she also is active with Valley View Farm. She helps with milking, calf care and social media. Sarah also helps with cattle sales. In addition, she is secretary for the Iowa County Fair Board.

The Vosberg’s 25-year-old daughter, Megan, also helps with milking and calf feeding. She met her husband, Lance, when he was working on the family’s dairy farm. Now Lance works construction. 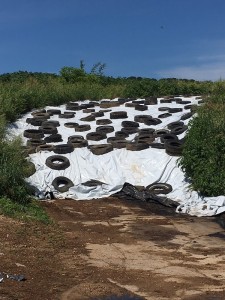 While many silage bunkers are made from concrete, this one at Valley View Farm was created from the stones in a side hill.

“We’re like the Normande invasion at the Green County Fair,” says Dan. Ruth had served as a 4-H leader for more than 20 years, so they give youth in the area an opportunity to select, train and exhibit Normande cattle. They also show at the national Normande show in Mineral Point every year and promote the Normande breed at World Dairy Expo.

Derek is in charge of crops and TMR. He works with a nutritionist for large animals. He and Dan also work together on seed selection and crop production.

Although they have plenty to keep them busy, the Vosberg family believes in giving back to their community. Dan and Derek both serve as volunteer firemen. Dan also plays guitar for worship services at church, and Megan serves on church council.

Today on TheFieldPosition.com we’re recognizing this Wisconsin dairy family for their accomplishments and thanking them for producing the wholesome dairy products we enjoy like cream. Ruth Vosberg shares one of her family’s favorite recipes for Cream Puff Dessert.

Heat over to 400 degrees. Bring 1 cup of water to boil. Take off the burner and add one stick of butter. Mix in one cup of flour. Add eggs one at a time and beat until batter is consistent. Spread into a 9 x 13 cake pan. Bake 25-30 minutes then cool crust.