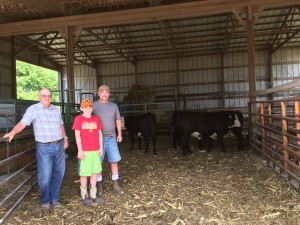 3 Generations of Cattle Producers at the Hawthorne Family Farm

The first Friday of June was the kind of day many of us take for granted. I watched as four generations of the Hawthorne family spent time on their family farm near Lohrville, Iowa, and thought “days like this get etched in our hearts and on our minds.”

Beautiful flowers were in bloom around a tidy vegetable garden, and cattle were grazing on pasture with a meandering creek. Skies were blue, and clouds were fluffy and white. Although the sun was shining brightly and the forecast was calling for a high near 90 degrees Fahrenheit, a cool breeze was blowing.

Latham® dealer, Mark Hawthorne, walked with me into a picturesque field of LH 9700 alfalfa that was seeded in mid-March 2016.

“Latham’s 9700 lives up to the description in your advertising,” said Mark with a smile. “It has a great disease package. It also has fine stems and is very leafy. It offers fast regrowth, too. We like that it’s tall because that makes more feedstuffs. We tub grind our alfalfa and mix with grass hay, grain and supplements. We find there’s a lot less waste when we tub grind rather than let the cattle have free choice from a round bale feeder.”

Mark’s father, Merrill, was busy cutting hay while the sun shined. Mark’s wife, Susan, and their 14-month-old granddaughter enjoyed watching the farming activity under a shade tree with Mark’s mom, Rita. Mark and Susan’s 12-year-old son, Max, was busy watering his pen of feeder cattle that he will exhibit in about 30 days at the Calhoun County Fair.

While he didn’t exactly tell me so, I gathered that what Max enjoys most about his 4-H beef project is the chance to spend time with his dad and grandpa. It makes him feel connected to carry on the tradition of raising cattle like those before him. He’s also learning lessons about business and life.

Here’s what I learned: These cattle will be placed in a pen on the fairgrounds. Max will make a poster that includes vital information like beginning weight in January and weight at the fair. A team of three judges will ask 4-H members questions like “What ration did you feed?” I learned that Max is feeding his cattle 40 percent protein with cracked corn. It takes approximately 30 pounds of feed per day per animal, and cattle will gain about four pounds per day.

The cattle business has been good to this third-year member of The Union 4-H Club. Last year Max sold his feeder cattle and cleared enough to buy this year’s pen plus put some money in the bank. He’s saving up for breeding heifers. And like many pre-teens, he has his sights set on owning his own pickup.

“I had always planned to farm if there was an opportunity to do so,” says Mark. “I worked for a farmer by Story City the four years that I attended Iowa State and for eight years after graduation. Then an opportunity came open for me in corn breeding at the Syngenta plant in Glidden. This was a good move because I was closer to home, so I could help my dad on the farm.”

Mark says he’d probably still be working in Glidden today if Syngenta hadn’t closed the plant. He didn’t want to uproot his family to Seward, Nebraska, so he put his Ag Business major and Agronomy minor to work for himself by taking on a Latham® dealership and taking over more of the day-to-day responsibilities on the farm.

The Hawthorne family backgrounds cattle. They buy 400-pound steers in January and sell them around 800 to 900 pounds sometime between Labor Day and Thanksgiving.

“Our farm has changed as times have changed,” explains Mark. “We used to finish cattle, but it got to the point where packers wanted to buy large numbers of cattle. Since we aren’t loading out semi-trailers at a time, we started selling them sooner. We used to raise hogs in open-front building but got out of the business instead of reinvesting in new facilities. It works out well because we get to take a break from doing chores for a few months each year.”

Late fall and early winter months provide time for the family to get enjoy a ski vacation or to visit family members and friends. Mark and Susan’s 25-year old daughter, Jessi, lives nearby. Their 22-year-old son, Kodi, lives in Barret, Minnesota.

“Our goal is to leave our farm in a position that allows our kids to come home if they so desire,” says Mark. “We’re getting the next generation ready now, so they can take over some day.”

One sure fire way to get all the kids to gather is to put brisket on the smoker, adds Susan. “They come running home when they hear Mark’s Midnight Brisket is in the smoker.” Today Mark is sharing his family’s favorite beef recipe with us. Beef. It’s what’s for dinner.

TIP: Hickory or mesquite wood is preferred, but for a slightly different flavor try pecan wood.