Farming is a Branch on the Prunty Family Tree 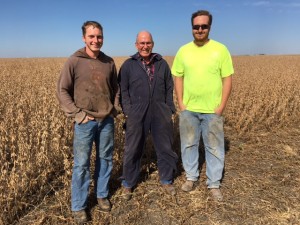 Today’s technology makes it possible for farmers in different states to conduct secondary research online in the off-season and put it into practice during the growing season.

“We had a hole in our bean lineup, so I went online and started looking for seed,” says Aaron Prunty, who farms with his dad, John, and his brother, Paul, on the South Dakota-Minnesota border near Pipestone, Minn. “I really liked what I read about Latham Hi-Tech Seeds in the F.I.R.S.T. Trials and decided to give it a try. This year we planted a plot that included Latham’s 1858 and 1538, which ended up winning. All three of the Latham numbers we planted performed well, and the 1858 out-yielded the competition in every side-by-side we put it in. We’ve decided to plant exclusively Latham® soybeans next year.”

For the past four years, Aaron has been responsible for making the seed decisions for the farming operation. His brother has a real knack for fixing equipment, and their father is primarily responsible fortaking care of their independent farrow-to-finish pork operation.

The Prunty family raises all crossbreds. They save their sows and buy boars: Hamp, Duroc, Large Whites and Yorks. As a result of keeping a fairly closed herd and mixing their own feed on site, they avoided PEDV. They also were one of the first producers to start vaccinating for PRRs.

“We’ve always been farrow-to-finish. We farrow year round, every week,” says John. “I love farming and that makes all the difference in the world. Fortunately, my wife has been a partner with me through the years.”

John’s wife, Elizabeth, mainly took care of the farrowing barn but now Paul is doing more of that. In fact, each family member is making the most of his natural abilities and interest. Aaron graduated in 2007 from South Dakota State University in Agronomy. Paul earned a degree in Animal Science in 2013 from SDSU.

“I’ve always enjoyed working with Dad. He has a lot of respect for us and our abilities,” says Aaron. “Dad very much leads by example. He doesn’t leave the dirty work just for us; he pitches in. He’s a really good mentor and he’s always been on the cutting edge of technology.”

John says, “It’s really fun farming with the boys. They’re full of shenanigans! See that guy operating the tank spreader there?” he says to me while I’m riding in the buddy seat of his combine. “That guy has worked here for 20 years. They tease him unmercifully, and he loves it. I’m supposed to be transitioning to retirement, but I’m having too much fun to quit.”

While each family member has his or her main responsibility, they all step in help when needed. John runs the combine, while Aaron and Paul trade off running the grain cart and semis for soybeans. Elizabeth runs the grain cart for the corn harvest. They’ve also divided up the spring field work. Paul does the strip tilling and plants the corn; Aaron plants the soybeans.

You could say that farming is in the Prunty’s blood. They’ve traced their ancestors back to the 1600s and learned they were farmers in northern Ireland.  In honor of the Prunty’s Irish heritage and their love of farming, we’re sharing a recipe one more #PorkMonth recipe for Irish Pork Stew.