Each day of the week, Brian Schafer tends to the feeder to finish pork operation on his family’s farm near Sheldon. On Sundays, he tends to his flock as pastor of the Lyon County First Presbyterian Church southeast of George, Iowa. 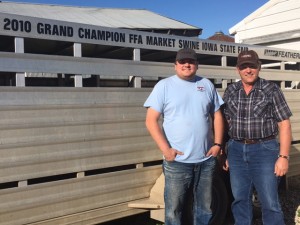 “About 90 percent of our congregation either farms or is a retired farmer. Just as many of these families have farmed for generations, they’ve also attended this church for generations,” says Brian, noting similarities between the two vocations he’s chosen. He spends one day per week knocking on doors to develop his Latham® Seeds dealership, one day each week in his church office writing sermons and another day visiting members.

Brian’s journey to the pulpit started when he and his wife, Mary, were youth group sponsors in Boyden. The Reformed and the Presbyterian churches combined their youth groups, so the kids had to find someone to give a sermon at a youth-led service.

“I told the kids that I would speak if they couldn’t find someone to give a sermon. Of course, they didn’t look too hard after that,” says Brian with an easy smile. “I agreed to do give that sermon, but I felt like God was calling me to do more so I enrolled in the lay academy.”

The lay academy in Fort Dodge is designed to teach others how to serve as a pastor of a small congregation. Brian attended 20 classes over the course of two years. He also was required to work with a mentor and chose the late Ken MacLeod, who was an assistant pastor at the First Presbyterian Church in Sibley.

Ken was a great mentor and role model, says Brian. After Ken passed away, Brian assumed his role as visiting pastor. Brian served as assistant pastor at First Presbyterian Church in Sibley for 10 years.

“I had no idea where this was going to lead,” says Brian. “I never imagined that I’d be serving a congregation, but I’m really enjoying this experience.”

Although becoming a pastor is a more recent ambition, Brian says he knew from the time he was a child that he wanted to farm.

“My dad always farrowed, and I couldn’t wait to start farrowing on my own,” says Brian, who started his own swine enterprise shortly after he and Mary were married. He got out of the business in the late 90s when the market tanked but was able to pursue his passion again in 2005. Today he and his brother Bruce own two 2,000-head buildings. Since Bruce has a fulltime job off the farm, Brian takes care of the feeder to finish operation. They used to farrow show pigs and hope to do so again in the near future it’s something the entire family enjoys doing.

Brian and his wife, Mary, are the proud parents of four grown children. Mary is a nurse and works fulltime at a medical supply company. Nathan, 28, and his wife, Maria, live in Hull. He’s a social studies teacher in Rock Valley, and she works for Foreign Candy Company. They have a two-year-old daughter named Kensley. Next in line is Adam, 24, who works as a field swine specialist for Cooperative Farmers Elevator (CFE) in George. Adam helps Brian with the farming operation, as well. The Schafer’s 23-year-old son, Eric, is the youth pastor at Zion Evangelical in Garner. Their daughter, Brittany, is a dental assistant in Sheldon.

“Our kids have learned some really valuable life lessons through their livestock projects,” says Brian. “I always say, ‘I’m not the member. If you’re going to show it, you’re going to do the work.’

“But honestly, when I was a kid, I didn’t think of farming as work. Farming was just life. It’s something I’ve always enjoyed doing and it’s a great way to raise a family. I still have my grandpa’s second tractor he ever bought. Now I see what a special relationship my dad has with my kids, and it’s special. Even though Dad has moved to town, he still comes out to the farm every day. Farming gives us a reason to spend time with together, and it’s quality time. Life is good.”

Have you ever noticed how we associate good times with good food? Today this family of Iowa pork producers shares with us one of their favorite recipes for pork chop marinade. I have to agree, this recipe is worth keeping. Brian, Mary, Adam and Brittany treated me to a grilled Iowa chops with homegrown tomatoes and watermelon. Yes, folks, life is good!